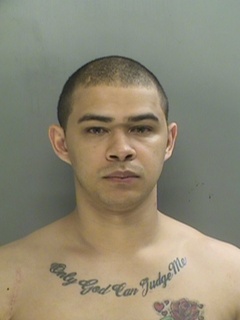 Patrick Jardell Brooks, 27, was arrested for the murder of John Shreves.  Photo courtesy of APD

Police say that Shreves had recently reconnected with Brooks, a former high school classmate, on Facebook.

Shreves, 27, was shot and killed in an Arlington sports bar parking lot around 2 am on June 10. Police found Shreves slumped over the drivers seat of his car outside No Frills Grill & Sports Bar in the 4900 block of Little Road.

In an arrest warrant affidavit, police allege that Brooks pulled the trigger from the passenger seat of Shreves' car. The pair made plans to grab a drink on Sunday, June 9. Shreves offered to drive Brooks to No Frills Grill & Sports Bar after the suspect said a DWI prevented him from getting behind the wheel.

Surveillance video shows that the men never made into the bar, as Shreves was killed within seconds of parking the car. A man, believed to be Brooks, is seen exiting the passenger side of the car and running into a field.

Using data from Shreves' phone, police determined that Brooks was the last person to have contact with the victim before his death.

Brooks has a criminal history including convictions for a DWI, possession of prohibited weapons and unlawful discharge of a firearm. He is being held on a $100,000 bond.

Services for Shreves will be held 11 am Saturday at Tate Springs Baptist Church in Arlington.