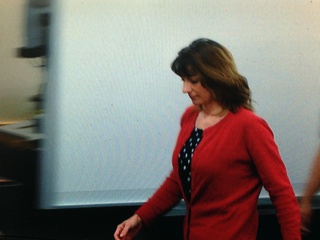 Michele Williams did not testify in her own defense. Photo by Claire St. Amant

UPDATE: After deliberating for seven hours, on September 29, the jury found Michele Williams guilty of murdering her husband, Greg Williams, and tampering with evidence. She was found not guilty of moving her husband's body.

Less than one week after Michele Williams' murder trial began, the jury has begun deliberating her fate. If convicted, the 45-year-old mother faces up to life in prison for killing her husband, Greg Williams, and cleaning up the crime scene.

Her defense is that Greg killed himself.

In closing arguments, prosecutor Sheila Wynn dispelled any notion that Michele panicked after finding Greg dead from suicide and made a split-second decision to clean the scene. "This is calculation. This is thinking about it. This is covering up what really happened," Wynn said.

Wynn and co-counsel Jack Strickland broke down the different stories Michele told police — and CBS News 48 Hours — about the night Greg died. After initially telling authorities that an intruder killed her husband, she eventually said Greg committed suicide and she staged a home invasion.

"She can't even keep the story straight," Wynn said. She also brought up testimony from Michele's son, Andrew O'Brien, about a plot to frame Greg's ex-wife.

Prosecutor Jack Strickland delivered an impassioned closing argument of his own, dramatically pointing at Michele in the courtroom and accusing her of cold-blooded murder.

After playing clips of 48 Hours for the jury during which Michele said an intruder killed her husband, Strickland laid into Michele's character.

"She is so arrogant. She is so convinced of her powers to manipulate and to glibly say — and have people believe — whatever she wants them to," Strickland said. "It’s a fantasy world that she lives in, where right is left, and up is down, and yes is no, and wrong is right. She wants to draw you in that fantasy world with this claim of suicide."

Defense attorneys Clay Graham and Cody Cofer admitted that their client isn't perfect but said that lies didn't make her a murderer. "This isn’t a character contest," Cofer said. "You have to put those feelings aside."

Her attorneys also attacked the idea that Michele had a financial motive to kill Greg, who made nearly $1 million the year before he died. "Greg was Michele's golden goose," Graham said.

In fact, in the weeks after Greg's death, Michele began overdrafting on her checking account. "Does this look like someone who planned to kill her husband for money? Within a week, she's out of money," Cofer said.

With his last moments with the jury, prosecutor Jack Strickland honed in on the holes of the case that Michele created herself. "She tried to pull the wool over everyone's eyes. Don't let her get away with it."