42 is an honest yet imperfect portrayal of legend Jackie Robinson 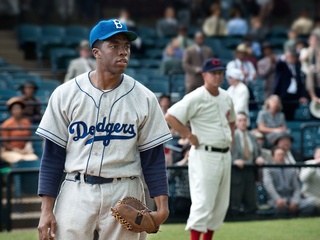 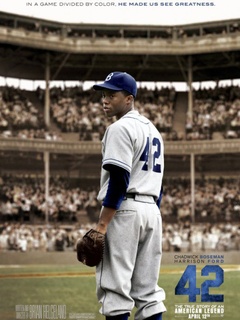 The movie 42 chronicles the first couple of years after Jackie Robinson was signed out of the Negro Leagues by the Brooklyn Dodgers. Photo courtesy of Warner Bros. Pictures

Making a movie about baseball/civil rights pioneer Jackie Robinson is such an obvious idea that it’s a wonder it hasn’t been done many times before. But, in fact, it’s only been done once for the big screen, way back in 1950, starring the man himself while he was still in the middle of his career.

The most likely reason the story hadn’t been touched in the 63 years since that film or in the 41 years since his death is because of the revered position Robinson holds in American history. If you’re going to tell the important story of the first man to break the color barrier in professional baseball, you have to get the details right, or the film is dead before it ever hits the screen.

Writer/director Brian Helgeland has accepted that challenge with 42. Not only was it Robinson’s number, but it is also the only number to date that has been retired by Major League Baseball.

Director Brian Helgeland doesn’t shy away from the racially charged environment that Robinson found himself in as part of the Dodgers.

The movie chronicles the first couple of years after Robinson (Chadwick Boseman) was signed out of the Negro Leagues by Brooklyn Dodgers general manager Branch Rickey (Harrison Ford).

Helgeland doesn’t shy away from the racially charged environment that Robinson found himself in, first as a member of the minor league Montreal Royals and then as part of the Dodgers. If anything, he pushes a bit too hard, which sometimes leads to trouble.

For example, one sequence depicts Philadelphia Phillies manager Ben Chapman berating Robinson with a constant stream of racial epithets. Helgeland sticks with the scene well after his point has been made, neutering what could have been a much more powerful moment.

For the most part, though, Helgeland keeps things on the level, because Robinson’s story is inherently dramatic and doesn’t need much embellishment. Most of the big moments from those first two years already are well-known, so all the film has to do is depict them honestly and the job is done.

Boseman is fantastic as Robinson. Besides being close to the spitting image of him, he seems to let the story come to him instead of overplaying anything. He also is athletic enough to ably embody the unnatural smoothness that Robinson had playing the game.

Ford, essentially the co-headliner of the film, is not quite as successful portraying Rickey. The film’s makeup and costume departments do a remarkable job making him look like the man, but his gruffness and the constant growling tone in his voice turns Rickey into kind of a comic character. Although moments of levity are fine, they shouldn’t overtake this particular role.

There are other quibbles here and there — obviously CGI baseballs, minor historical inaccuracies — but Helgeland and crew have succeeded in doing exactly what should have been done long ago: honoring the bravest baseball player America has ever known.