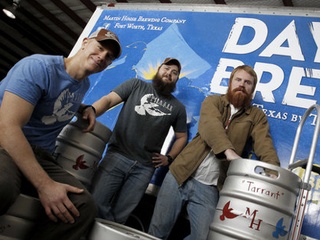 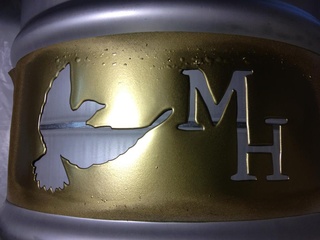 Martin House's beers are designed for the kind of drinker that has to hike a trail before becoming properly thirsty.  Martin House Brewing Company / Facebook

The founders of Fort Worth’s soon-to-open Martin House Brewing Company want their beers to be as indispensable to your adventures as a compass or pocket knife.

With brews meant to be enjoyed “around a fire with close friends while reminiscing over the day’s killer mountain bike ride,” Martin House Brewing targets the kind of people who enjoy their beer after burning a few hundred calories outdoors.

To find the inspiration for beers like River House Saison, a beer for kayakers, or Day Break, a four-grain breakfast beer modeled after a bowl of cereal, the four founders didn’t have to look very far.

Martin House Brewing targets the kind of people who enjoy their beer after burning a few hundred calories outdoors.

“On the most basic level, it’s what we like to do, and we wanted to make beer that’s made to do that,” says co-founder and head of business development David Wedemeier. “As we’ve been doing this so far, we’ve found a lot of people that want to take quality beers with them on trips or river floats.”

To that end, Martin House will can its brews by early May, including a 16-ounce tallboy. But first the label has to launch March 30 at the Fort Worth Flying Saucer.

The idea for Martin House really began nearly a decade ago when co-founder and president Anna Martin bought her husband, Cody, a home brew kit for his birthday. The seed for a brewery grew as Cody visited breweries across the country and examined the machinery necessary to make craft beer.

“Cody’s a professional engineer,” Wedemeier says. “He worked on environmental remediation systems, which is basically moving water through systems to clean it up. Brewing is essentially the same principle of pumping around water, so he took his love for beer and combined it with his knowledge of the systems.”

When Cody and Anna moved back to Texas, they recruited Wedemeier and Adam Myers, a fellow engineer and UT Arlington alum, to help found the company.

As part of their weekend warrior angle, Martin House is situated on the Trinity Trails just southeast of the intersection of I-35 and Highway 121.

“It’s great integration,” Wedemeier says. “We’ve got a very nice parking lot that looks west for an unobstructed view of the sunset and downtown. It’s a great place to have a beer and grow a connection with everyone.”

Wedemeier says that the decision to tap their first keg at Flying Saucer was a no-brainer because of its history as a craft beer haven and because it’s only about a mile down Third Street from the brewery. They’ll tap two of their four beers: River House Saison and Imperial Texan, a red ale/IPA hybrid.

The remaining two brews — Day Break and a pretzel-based beer, There Will Be Stout — use ingredients that aren’t considered “normal” and require additional steps before being approved by the TABC.

For now, Martin House is just in Fort Worth, but Wedemeier wants to get into Dallas as soon as it makes sense. “There are some great places in Dallas,” he says, “but the demand in Fort Worth dictates our schedule. If there are people here asking for it, we’ll start here because of our manpower.”

Central Market plans to carry cans of Martin House, and there are talks with Whole Foods Market as well as several mom-and-pop places in DFW.

Wedemeier also hopes to introduce several more beers, including summer and fall seasonals. But first the focus is on distributing kegs and getting the brewery ready for tours.

“Martin House is about friends getting together and getting stuff done,” Wedemeier says. “That’s what being local is all about.”

Mark your calendars for these holiday happenings in Plano
Everything you need to know about attending this beloved Texas balloon festival
Stock up on tacos, pizza, and seafood at these 3 mouthwatering eateries