News You Can Eat
Burgers, beer and brunch bump up the good Dallas restaurant news 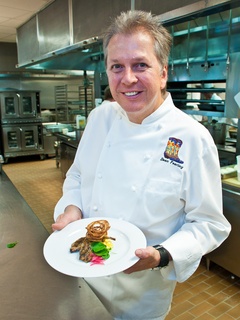 On April 29, Dean Fearing will be at Barnes & Noble on Northwest Highway for a book signing. Photo by © Michelle Watson/CatchLightGroup.com
Texas Food Bible: From Legendary Dishes to New Classics, by chef Dean Fearing. Courtesy photo

Chef Dean Fearing already has two cookbooks under his belt, but his new Texas Food Bible: From Legendary Dishes to New Classics (Grand Central Life & Style) finds him at his most expansive and at ease.

The book, which comes out on Tuesday, April 29, with a signing event at Barnes & Noble on Northwest Highway, features more than 200 recipes, including trademark items such as his tortilla soup and "mop" sauce. Recipes include step-by-step methods and a "pantry" section defining Southwestern ingredients such as chiles and herbs, along with a list of sources.

There are obligatory nods to Dublin Dr Pepper and Sonny Bryan's barbecue sauce but also unexpected offerings, such as the chapter on smoking and grilling.

Texas Food Bible explores the aspects of Texas' culinary heritage that set the stage for Southwestern cuisine, while weaving in anecdotes from Fearing's family and childhood. His enthusiasm comes across on the page. For example, his definition of a habañero pepper begins, "Ooo-eee! These are hot little guys."

The book also spotlights the people in his life. Enchiladas with jalapeño potatoes come from his assistant, Carmella. Pancakes are named for his sons, Jaxon and Campbell. About his Granny Fearing's paper bag-shook fried chicken, he says, "I have been eating and serving this chicken for Sunday dinner my entire life."

He generously includes recipes from sous chef Eric Dreyer, such as the chicken enchilada casserole with green chile sauce; pastry chef Jill Bates; his Houston chef friend Robert Del Grande, whom he calls a "kitchen genius and magician"; and even chef Stephan Pyles.

There's a chapter on side dishes that includes six corn recipes, fried green tomatoes and a detailed explanation with photos on how to make avocado fries. There are appealing bread and biscuit recipes, including Shiner Bock beer bread, Navajo fry bread and masa for tamales. Desserts are simple: cobblers, crisps, Texas sheet cake, pecan pie and fried peach pies — which he says are his all-time special desserts. On the back of the book is an acknowledgement from Wolfgang Puck.

There are his obligatory nods to Dublin Dr Pepper, which he uses to braise short ribs, and Sonny Bryan's barbecue sauce, accompanied by a full page of photos from the original location on Inwood Road.

But there are also unexpected offerings, such as the chapter on smoking and grilling, with a recipe for smoking brisket, including a tip on how to tell if it's done. He muses on the history of chili: "Rather than depend upon any one person's sense of history, I will place a bet down that chili was a stew that evolved from all kinds of cooks using the products they had on hand to create a filling meal," he says, before recalling the time he made it at the Mansion for Bill Cosby.

He shares the original source of the famed tortilla soup: It was brought to the Rosewood Mansion on Turtle Creek by then-owner Caroline Rose Hunt, who'd had it at the Argyle, a private club in San Antonio. "I don't know how many bowls of tortilla soup I've prepared, or how many different preparations I have eaten, but I can tell you the figure is in the thousands," he writes. "It remains my million-dollar baby!"