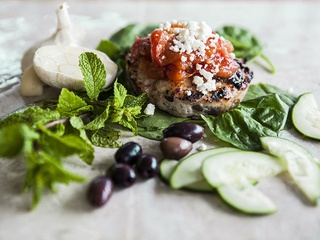 Beet salad is now on the menu at Origin Kitchen. Photo courtesy of Origin

Fall is in the air, and it's hitting local restaurants too, with new fall menus offering the kinds of fare you might expect, such as root vegetables. There are also new burgers, milkshakes and bubble tea. For the latest info on all the fall restaurant openings, go here. For the rest, read on.

A third branch of Snap Kitchen has opened in Preston Royal Village, at 6025 Royal Ln. in a former stationery store. There isn't an actual kitchen at Snap Kitchen; the food and juice are prepared at a commissary, then delivered to the various stores. The other two Dallas locations are in Uptown and Snider Plaza; the Austin chain has 16 locations total in Austin, Houston and Dallas.

Glass Boot Biergarden has closed. Husband-and-wife owners Blake and Di Ann Bogus opened the German-themed restaurant-bar on Henderson Avenue after spending many dollars and days rebuilding the former Save Way Market, including the construction of a 2,000-square-foot patio. According to comments on its Facebook page, the place seems to have closed at the end of September.

Bowlmor Lanes (formerly 300 Dallas) has updated its menu with excessively large items that are made to share. There's a 5-pound, 14-inch-round party burger; a 2-foot-long hot dog topped with peppers, onions, pickles, tomatoes, mustard and neon relish; and a "monster" cookie melt consisting of an oversized cookie served in a skillet and topped with vanilla ice cream, chocolate, chocolate sauce and whipped cream. Is "sharing" a burger something people really want to do?

Modmarket, which has opened its first DFW branch in Flower Mound and has another opening soon in Plano, created a new dough recipe for its pizza that is now being served at all the branches of this Colorado-based chain. The dough contains flour, water, sea salt, yeast, extra virgin olive oil and a dash of agave, and it uses an overnight preferment, which adds more flavor and strength.

Civello's Raviolismo, Dallas' ravioli maker since 1950, has new fall items: manicotti with spinach and cheese, in a casserole for two; mushrooms stuffed with spinach and shrimp; eggplant Parmigiana; butternut squash ravioli; and an "East meets West" eggplant ravioli that can be served like a pot sticker or a traditional pasta dish.

Cast Iron at Omni Fort Worth Hotel updated its Sunday brunch, with a bloody Mary bar, a build-your-own parfait option, and a bread and butter bar. An appetizer buffet features shrimp cocktail, cheeses, Rahr Ugly Pug red lager rolls and bagels. Salads include Brussels sprouts with bacon and blue cheese and beet with goat cheese. It runs from 11 am to 2 pm and is $28.95 per person, or $14.95 for children 5 to 12.

24 Plates in Fort Worth's Near Southside district has new fall dishes devised by chef Oscar Cruz. At dinner, there are duck confit quesadillas, Akaushi meatloaf, tempura lobster mac and cheese, and a fresh catch of the day. A weekend brunch menu includes pork belly Benedict and chicken and waffles.

24 Plates will also introduce a reservations-only chef’s table dinner on Wednesdays and Thursdays with two seatings at 6 and 8:30 pm, limited to six or eight people per seating. The dinners include five- to seven-course meals of small plates, tapas and entrées, with optional wine or beer.

Snuffer's has a limited-edition burger called the ghost pepper cheeseburger served at all six Snuffer's. It's a half-pound burger with ghost pepper cheese, grilled jalapeños, red onion and yellow mustard. The burger is $8.99, and it's available until October 31. We just wrote an entire item on a burger.

Yumilicious has a new line of boba teas, served in adorable rounded bubbly bottles. Made with brewed black tea, it comes in two varieties: milk tea and mango tea. Optional add-ins include popping boba, mango jelly, or traditional boba soaked in honey and brown sugar. Boba is a chewy bite made from tapioca. Popping boba consists of popping boba bites made from seaweed extract filled with fruit juice.

Twisted Root Burger Co. has a limited-edition pear shake with vanilla custard ice cream, pureed pear and strawberry. For every shake sold, Twisted Root will donate $1 to Susan G. Komen. The shake costs $4.99 and is available throughout October at all Twisted Root locations.

Snuffer's has a limited-edition burger with ghost pepper cheese and grilled jalapeños. Photo courtesy of Snuffer's

At risk for heart disease? Take this quiz from Methodist Dallas to find out
Virtual healthcare takes the hassle out of seeing a doctor
Dallas medical experts help digest info about probiotics