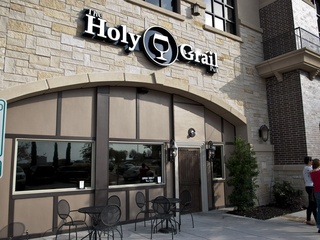 Holy Grail is a haven for beer nerds. Photo courtesy of Brewventures in Food

Craft beer fans already know Holy Grail Pub for its fine selection of brews. But the Plano restaurant-bar ups the game this week with the release of its annual "Santa's Secret Stash," featuring rare brews in limited quantities.

Those include a pair of beers from Oregon brewery Deschutes, one of which is virtually unavailable, as well as some oddities and oldies. Owner Brian Rudolph says he uses this event as an opportunity to both clean out his cellar and share some gems.

"All year round, I'll get something interesting but only in small quantities — too small to feature in a special event," he says. "It might be something I only get a case or two of, so I'll put it aside. Or it might be that the beer isn't ready yet; I want to give it a couple years. It might get buried, and then I find it, and it's, 'Hey, this is 2 years old! Fantastic!'"

That includes a lemongrass wheat ale from Widmer Bros. "That's one of those things that was buried in my walk-in," he says. "I forgot all about it. It's a wheat beer, which you don't usually age. But you might want to try it if you missed when it came out."

His two Deschutes include the Black Butte XXV, an exotic reserve porter, and the Dissident, a sour brown ale that beer nerds know is nearly impossible to find.

"I only have that in a very small quantity. I just got one case," Rudolph says.

He has the exotic Stone Crime and Punishment set from the San Diego brewery that's infused with spicy jalapeño peppers; and Brew Dog Paradox Jura, a limited-edition imperial stout from Scotland that Rudoph calls "real big."

His list also includes two rare beers by Rodenbach, including the just-released berry-flavored Rouge. And, last but not least, he has a case of St. Arnold's Pumpkinator, the 2012 version.

"I guess it's like a Christmas present," Rudolph says. "I like to open up the cellars to our good customers who've been with us all year round."