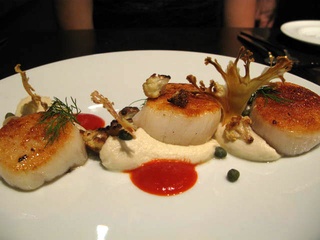 Open less than two weeks, FT33 — Matt McCallister's new restaurant in the Design District — became the epicenter of the Dallas food scene Tuesday night. Its dining room was packed with media and industry people who like to visit a restaurant as soon as it opens.

During the day, the restaurant's Los Angeles-based PR firm hosted a tasting lunch for a dozen or so bloggers from SideDish, the Observer, and PaperCity. At night, diners included McCallister's wife, Iris, and her aide-de-camp, Christina LaBarba; sommeliers James Tidwell and Melissa Monosoff (who will host a sommelier dinner at FT33 on October 29); publicist Lindsey Miller; Hotel ZaZa/Dragonfly manager Alex Aland; and David Anthony Temple, a.k.a. "Chef DAT," who was celebrating a birthday with a table of a dozen friends that included his mother.

The hardest-working person had to be Ryan Tedder, tasked with recommending a wine to a critic known for extreme finickiness in that department.

Among the dinnertime media types were June Naylor from DFW.com, Pat Sharpe from Texas Monthly, Mark Stuertz from Modern Luxury, Leslie Brenner from the Dallas Morning News, and Maxine Trowbridge from Pink Memo. Who was there by invitation it is not for me to say, but one can assume Sharpe and Brenner were not expecting such company.

McCallister, who appeared on Fox 4's Good Day Wednesday morning, is known for concentrating so intently on his presentation that he rarely looks up from his plate. But more than once he could be seen fixing his gaze on Brenner, who was seated in his line of sight.

But the hardest-working person in the restaurant had to be Ryan Tedder, tasked with recommending a wine to a critic known for extreme finickiness in that department. Were those beads of sweat on his forehead as he proffered a bottle to Brenner and her table?

There's no way to know how many tables paid their bill, but many of the media were there on someone else's dime, including me. (I did leave a pretty good tip.) My table shared four appetizers: a turnip-radish salad, pork jowl, uni and chive pancakes, and smoked potatoes. We also sampled four entrées, including lamb, chicken, scallops and the nightly fish catch.

​ Texture seems big here. Scallops always get seared, but FT33's had thick crusts on top and bottom, with a still-gentle center.

The pork jowl and smoked potatoes made everyone at the table "oooh." The pork was eye-catching, with the pink meat cut into slabs and propped up like a mini Stonehenge. The potato dish had a surprisingly meaty personality for a veggie dish; the smoking gave the potatoes a meaty flavor and the accompanying maitake mushrooms boasted a hearty texture.

Texture seemed big. Scallops get seared everywhere, but FT33's had thick crusts on top and bottom, with a still-gentle center. They were placed over mounds of the creamiest-ever cauliflower purée.

The chicken preparation was also unique. Chicken breast was pressed until firm, then laser-cut in half and perched sideways into a tableau. It came with a shredded chicken thigh "confit" with chanterelle mushrooms and a few random boiled peanuts.

The wild part is that on the same Tuesday night, Ocho Kitchen + Cocktails in North Dallas and Seasons 52 at NorthPark Center both held introductory media events, and Baccarat crystal hosted a party at Salum introducing a new line of wine glasses trying to compete with Reidel.

Dallas' restaurant scene is enjoying crazy times, but even with that, you don't usually see such a cluster as this. The only person missing was The Brad.