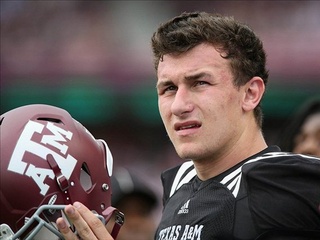 If you searched for Manziel on NCAA's apparel site, you received hits for a Texas A&M No. 2 jersey, the same number he wears.  cbssports.com

Manziel is currently facing allegations of selling his autograph, a move that is banned by the NCAA.  sportscollectorsdaily.com

The NCAA is stepping out of the jersey-selling game after reports surfaced earlier this week that student-athletes’ names were tied to memorabilia in the search function of the organization’s apparel site.

NCAA president Mark Emmert said that jersey sales on ShopNCAASports.com “could be seen as hypocritical” in the face of two lawsuits against the NCAA concerning the use of student-athletes’ names and likenesses.

NCAA president Mark Emmert said that jersey sales “could be seen as hypocritical.”

College apparel such as replica jerseys are sold without the names on the back to avoid being associated with a particular player — which is surely what fans are thinking as well when they buy a Texas A&M No. 2 jersey without Manziel on it.

Working on a tip, ESPN college basketball pundit Jay Bilas found that a search for Johnny Manziel or Jadeveon Clowney resulted in No. 2 and No. 7 jerseys for their schools, A&M and South Carolina, respectively.

The site disabled search soon after the revelation, but by then it was on the Internet. Sites such as USA Today and Deadspin ran articles on the issues while Bilas, who played at Duke, went on a Twitter campaign to expose the hypocrisy.

“It's not about need,” Bilas told USA Today on Wednesday. “It's about exploitation. Any time an entity or a person makes money off another entity or person, while at the same time restricting that person or entity, that's exploitation. It's wrong to the point of being immoral when you really think about it.”

The issue of paying players some sort of compensation has been a hot topic this week following allegations that Manziel sold his autograph for at least five figures. NCAA athletes are barred from profiting from their name or likeness, hence the furor around the website’s search functions.

If you searched for Manziel on NCAA's apparel site, you received hits for a Texas A&M No. 2 jersey, the same number he wears.  cbssports.com