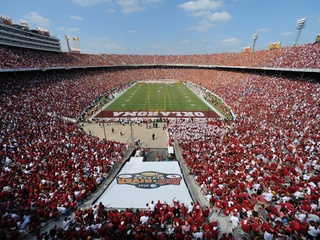 Although the orginigal structure of Cotton Bowl Stadium was built in 1921, the Midway location has been hosting football games since before the turn of the century. A lot has changed since then, including an increase in seating from 15,000 to 92,100, but even more has stayed the same. The stadium is still the backdrop for the Texas State Fair, which comes to life in nearby Fair Park every September, and the Cotton Bowl hosts two of the biggest games in college football: the Red River Rivarly between Texas and  OU, and the State Fair Classic between Grambling University and Prairie View A&M.

The Texas-OU game has sold out every year since 1941.