Elm Street, one of the main drags of Deep Ellum, with downtown Dallas in the background. Courtesy photo
Deep Ellum logo rendered in a neon sign. Photo by Steve Rainwater 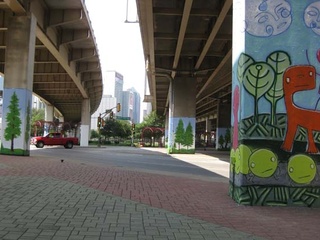 Dallas loves its shiny and new, which is why funky, soulful Deep Ellum is such a local treasure. Located just east of downtown, it's a four-street grid with historical brick buildings and an evolving lineup of bars, restaurants and clubs. The neighborhood's association with live music began in the 1920s, when it birthed a blues and jazz scene peopled by such names as Blind Lemon Jefferson and Huddie "Leadbelly" Ledbetter. In the late '80s, it caught a second wind with the advent of punk rock and prevailed as Dallas' primary entertainment district through the '90s, at clubs such as Trees, Club Clearview, Dada, Orbit Room, Deep Ellum Live and the Bomb Factory. Currently, the area is enjoying another revival as a foodie hot spot, home to nationally recognized Cane Rosso and Pepe & Mito's; renowned cheesemaker Mozzarella Company; and Dallas' first craft beer brewer, Deep Ellum Brewing Co.