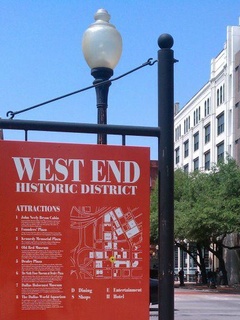 Dallas has changed significantly since the West End was founded in 1871. Back then, this was where the Houston & Central Texas Railroad arrived, making Dallas a major distribution center and attracting manufacturing companies whose warehouses now define the architecture of the area. Because the area was declared a historial district in 1975, many orginal buildings still stand, although they now serve different purposes. The Old Red Courthouse, for example, is now a bustling museum and live music venue. The West End is a popular dining spot, with traditional Texas cuisine options (Y.O. Ranch Steakhouse, Hoffbrau Steakhouse, Sonny Bryan's Smokehouse) as well as a number of nationally known chain restaurants. All four Dart Rail lines (red, blue, green, orange) stop at the West End.