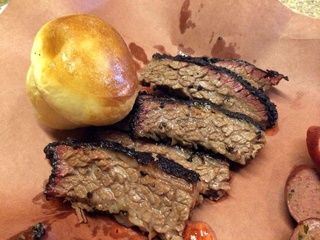 Hutchins was originally known as Roy's Smokehouse in 1978 when it was a small space connected to founder Roy Hutchins' home. In 1991, the restaurant opened in its current location off Tennessee Street in McKinney. Son Tim is now the pitmaster, and Hutchins BBQ has made Texas Monthly's list of the best barbecue in the state.