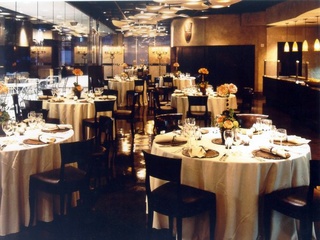 Named for owner Gabriel Barbier-Mueller's daughter, Marie Gabrielle is a downtown breakfast-and-lunch spot located on the ground floor of the Centex Building. Like most downtown spots, it has a lunch special, pairing a half-sandwich on house-baked bread with a cup of house-made soup for $7.40. But Marie Gabrielle also has a full menu of serious chef-level entrees such as beef tenderloin with polenta and haricot verts, grilled shrimp with black beans, and an Angus burger with Parmesan-truffle French fries. The food's only half the story. Many would say that the real reason to come here is the splendid patio/formal garden with precisely-trimmed shrubs and giant chess-game pieces that make you feel like Alice in Wonderland.