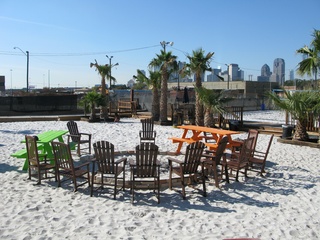 The Sandbar comes from five volleyball fanatics, including a couple of ex-pros, who decided that Dallas needed a bar with a serious volleyball facility. So they built one on an unpredictable site: a former parking lot between Deep Ellum and Exposition Park. They imported some fine white sand, planted palm trees, constructed six tournament-quality volleyball courts and erected a beach shack whose entire backside overlooks a brilliant sand-filled patio. The menu is "Texas beach fusion," and drinks include plenty of beer taps devoted to local brews.