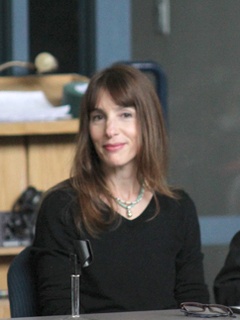 Pamela Gywn Kripke writes for a variety of publications.

This photo of Kripke and her father is on the cover of Doctor's Daughter.

Growing up as a doctor's daughter, Pamela Gwyn Kripke dissected animal hearts at the kitchen table. She would later trade in a pre-med major at Brown University for one in journalism, but she never lost her homegrown love of science.

This fascination with the medical world takes center stage in Kripke’s first eBook, Doctor’s Daughter. It’s mini-memoir of sorts and a moving tribute to the life of her father.

A self-described technology neophyte, Kripke is probably one of the few eBook authors to pen her first draft by hand. But she felt the eBook format was the right fit her what she calls her “little book.”

“It’s a funny length, but now there’s an opportunity for funny length things,” Kripke says. “A regular book can’t be 22 pages, and you can’t put that in a magazine. But it came out like that. It was all it needed to be.”

Kripke is an accomplished journalist who was written for the New York Times, Salon, Huffington Post and D Magazine. The University Park resident recently sat down with CultureMap to discuss the process of publishing Doctor’s Daughter, which hit virtual shelves July 1.

CultureMap: You open the book by saying you’ve regretted not giving your father’s eulogy since the day he died. Have you been writing this book ever since?

Pamela Gwyn Kripke: He died 19 years and 11 months ago, but these things mull and they stay with you. I could have written it then, but I think it’s taken some years to realize all the things I wanted to say. You look back and think, “Why didn’t I stand up and say something?” Now I would stand up, and I feel really guilt about it, even after nearly 20 years.

CM: The book also features stories about your mom and brother. How did they feel about the book?

PGK: Oh, they don’t know. I didn’t tell them, not yet anyway. I write a lot of stuff and don’t tell them. I think in certain ways my brother would feel bad. He has no clue. He probably doesn’t even remember saying that we shouldn’t give a eulogy.

I think my mom would want to talk about it and go over it, and I don’t want to get into that right now. At some point I will tell them that it’s out there, and they should read it. But now I want to experience it for my own without having to deal with their emotions about it.

CM: How did you decide which stories to include?

PGK: Life and death is what doctors deal with and talk about all the time. I wanted to alternate between stories about his life and about dealing with his death and to create some connection between the two.

I connected the last sentence of each section to the first sentence of the next section. It was actually a fun thing to do as a writer. It was an enjoyable process. I thought about subtitling it “Life and death with a physician father,” but I decided that I didn’t want death in the subtitle. I think that’s a turnoff to buyers.

CM: People often say that funerals give them closure. Your father’s didn’t seem to have that effect. Did the finishing this book give you a sense of closure?

PGK: Dying is really bad. I think that people cope by saying it’s okay, but I really think that some times it’s not okay. In this particular case he was very young, only 64, and a very vibrant guy. There was a lot he didn’t get to experience with us.

As a doctor, he knew what was going on. He was reading his own charts and X-rays. But he totally ignored it. He didn’t say the word cancer once. So I couldn’t say “Dad, how are you feeling about this?” There’s none of that goodbye stuff. And that’s a painful thing.

CM: What do you hope people will take away after reading your book?

PGK: Look at your family situation and realize that everyone is unique and really appreciate what your parents do. Also, you have to say what you think at the time. You don’t get a lot of shots at things, and you don’t want to have regrets. Now I’m right out there with it. Speak up. What’s the worst thing that could happen?

Doctor's Daughter is available via Amazon.com for $2.99.

Pamela Gywn Kripke writes for a variety of publications.