Dallas artist (now living in Aspen) Christopher Martin created a 120-foot-long reverse glass painting for the Circuit of the Americas.

Velocity represents the fluidity, movement and speed the owners wanted associated with the Circuit of the Americas. 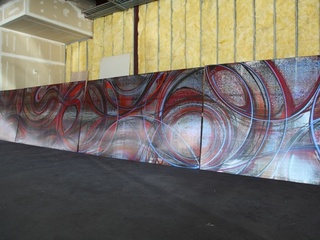 Velocity will span the entire length of the grandstand lounge.

Until Guinness World Records weighs in, the 120-foot “Velocity” stands alone as the largest acrylic painting in North America.

Dallas artist Christopher Martin was commissioned to develop the larger than-life piece by Circuit of the Americas™ chairman and co-founder Bobby Epstein, who has reserved it as the crowning touch for the grandstand lounge in the Austin home of the Formula 1 U.S. Grand Prix.

The genesis of this epic painting began in Aspen, where Martin now resides and has a successful gallery in addition to his Dallas outposts on Dragon Street and in Victory Park.

The abstract flow that occurs consistently in Martin’s signature reverse glass technique perfectly mirrored the terrain at Circuit of the Americas.

“I met [Epstein] there, and he bought two or three pretty substantial paintings,” Martin says. “We talked about the racetrack, and he asked me if I was into doing a piece for it.

“He went through the things he thinks my work represented — the fluidity, movement and speed that they wanted associated with the track.”

A visit to Austin revealed the abstract flow that occurs consistently in Martin’s signature reverse glass technique perfectly mirrored the Circuit’s terrain, while an older image in the artist’s portfolio inspired the painting’s palette of red, blue and silver.

With just six weeks to create the 15 8-by-5-foot panels that comprise “Velocity,” time was of the essence. But the piece was completed for a big reveal in Dallas this Friday at 7 pm at Martin’s Dragon Street space.

Afterward, the piece will be installed in its permanent home for hundreds of thousands of racing fans to admire throughout 2012 Grand Prix November 16-18 and at future Circuit of the America events.

For Martin, creating “Velocity” has opened up a whole new world of what he can do with his work. “You have to do things you don’t think you can because it’s so important as an individual,” he says.

“Once you exercise to a certain point artistically, you can’t help yourself from jumping to the next level.”

“Velocity” will be revealed Friday, November 9, 7 -10 pm, at the Christopher Martin Gallery at 1533 Dragon St. All art enthusiasts are invited to attend.

Dallas artist (now living in Aspen) Christopher Martin created a 120-foot-long reverse glass painting for the Circuit of the Americas.

Velocity represents the fluidity, movement and speed the owners wanted associated with the Circuit of the Americas.