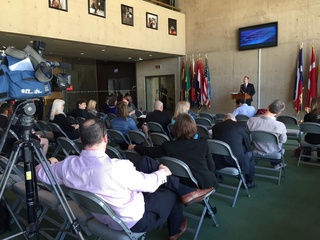 Frustrated by a ban on public debate about the Trinity toll road, Dallas City Council member Philip Kingston held a press conference at City Hall on March 25 to blast the project as being sold on "a pack of lies."

The conference, which drew a crowd of media, politicians and interested citizens, was the latest counter-move against a silencing trend by toll road supporters.

Kingston called it quickly after being told he could not speak on the topic during the council meeting. He kept his remarks brief, with a list of the ways the toll road is deceptive and suggestions on how its advancement can be stopped.

Recent efforts to discuss the toll road at meetings or public events have been stymied.

There was an outburst at a city council meeting on March 4, when three people showed up to promote the toll road during the open-mic session. Council member Scott Griggs responded, calling it "the worst boondoggle imaginable."

City attorney Warren Ernst protested Griggs' right to speak because the toll road wasn't on the agenda. Then Mayor Mike Rawlings sent a warning memo to city council members, claiming that speaking out of turn could be illegal; the Dallas Morning News called that "a case of selective enforcement if there ever was one."

In response, Kingston signed up to speak at the city council meeting on March 25, in the open-mic segment as a regular citizen. In response, so did fellow council member and toll road advocate Vonciel Jones Hill.

But at the last minute, Kingston and Hill's names were removed from the public speaker list. Dallas city secretary Rosa Rios said in an email council members cannot address the public in the open-mic segment.

Rawlings' office issued a statement, saying that "we will bring the Trinity Parkway to the council for discussion when there is something to vote on."

Rawlings has been non-responsive to requests for a public debate. His name was listed, along with fellow mayoral candidates Marcos Ronquillo and Richard Sheridan, on a "Trinity town hall" forum that was supposed to take place on March 23; on the day of the event, his office said that was a mistake. The three candidates will participate in a debate at Belo Mansion on March 31.

In terms of stopping this thing before it starts, Kingston said that the city has the authority to remove the project from its transportation priority list, and that bond funds could be reprogrammed to pay for amenities. He said that the road that was approved in 2007 is not the same road that's in the works now.

"Things change; think about what you were doing in 2007," he said. "I think we've learned it's a bad idea, and now we recognize that."