Let Me Sum Up
Why DFW should want American to merge with US Airways. Plus: phallic graphics! 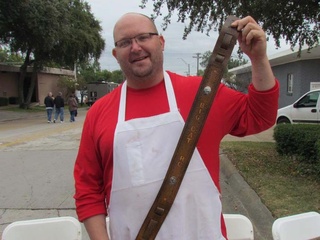 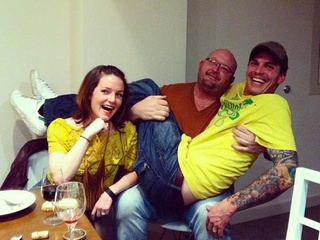 Randall Copeland, the well-liked chef and co-owner of Restaurant Ava and Boulevardier, died on Tuesday morning. He was 39. According to a spokeswoman for his restaurant, Copeland died in his sleep; the cause of death was not known.

Nicknamed "Big Cat," he had an irrepressible and playful spirit.

"He was about as well liked as any chef in town, a standup guy who tried to elevate everyone around him," said Jimmy Contreras, a friend and colleague. "He was as big a presence in front of the house as he was behind the house."

"We just had a long conversation on the Good 2 Go patio. He was always the life of the party," said chef Jeana Johnson, who worked with Copeland at the Green Room.

"His cooking had a lot of soul," said FT33 chef-owner Matt McCallister. "He took a rustic, simplistic approach and tried to treat everything with respect. We were literally emailing yesterday about a dinner we were going to do out at Ava two weeks from now. I have the menu in my email."

Copeland was born and raised in East Dallas. He attended the culinary program at Skyline High School, followed by El Centro College. He worked at the Park Cities Hilton, the Eastern Hills Country Club in Garland and the Green Room under chef Colleen O'Hare. He left Dallas in 2004 to work at Bradley Ogden inside Caesar's Palace in Las Vegas before returning to Texas in 2007 to open Restaurant Ava, with longtime friend and chef Nathan Tate.

In 2012, he co-opened Boulevardier, a French bistro in Bishop Arts, with Tate and brothers Brooks and Bradley Anderson. The restaurant made many local "Best of 2012" lists, including the Dallas Morning News and D Magazine.

Brooks Anderson, co-owner of Boulevardier, released the following statement from himself, his brother Bradley and chef Nathan Tate:

Early this morning Nathan, Bradley and I were informed of the tragic news that our friend and business partner, Randall Copeland, passed away in his sleep last night. At this time, no further information of Randall’s untimely passing is known. Our thoughts and prayers are with his family and extended network of friends in the chef community and beyond. RIP Big Cat. You will be sorely missed.”

Recently he had gotten into running and would proudly post his run times on his Facebook page, where testimonials have already begun to pile up: "Devastating news about my friend and a great man" ... "RIP to a great chef and wonderful man who lived life to the fullest." ... "I don't think I have ever nor will I ever meet another man like you, thanks for always being such an inspirational man." ... "One of the things Randall said to me recently was "I love life – and I'm going to LIVE it every day." He did." ... "My heart aches!"

He leaves behind parents and a brother.

Chefs Taylor Kearney and Nathan Tate announced that they'll be cooking at Restaurant Ava while things get sorted out, and they are asking friends and admirers to come out to Ava on Tuesday night and celebrate their friend.

Copeland's last post was on Sunday night, a characteristically enthusiastic entry touting mixologist Jason Kosmas: "Tasting J's spirits with the boys at Bolsa. Kuddos to you Jason, here's to all the hard work. Glad to call you my bud!"