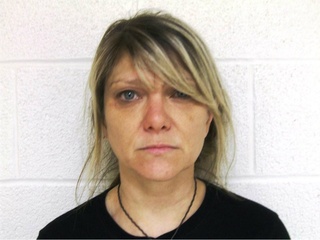 Paula Nelson said, "This may be my favorite mugshot ever." Photo courtesy of Menard Country Sheriff's Office

Despite a new poll released on April 22 that shows nine out of 10 Texans want to see pot decriminalized in the Lone Star State, it is still very much illegal. Paula Nelson, frontwoman for the Paula Nelson Band and daughter of Willie Nelson, was arrested on April 20 for possession of marijuana.

The singer was arrested in Menard, Texas, about two and half hours west of Austin, during a routine traffic stop. Nelson allegedly was carrying less than two ounces of pot, a misdemeanor that carries up to 180 days in jail and a $2,000 fine.

Nelson took to her Facebook page to defend the police officers for doing their job and to urge fans in supporting the decriminalization for marijuana. "Speak up on 'Legalizing' (sic) where it counts the most in your state... Like I said all of the 'people of the law' I met during my 4/20 adventure were great and I'm better for meeting them," Nelson wrote.

Paula is the latest Nelson to be arrested for marijuana possession. Her father Willie, who has been a proud pot smoker for decades, has been collared three times in Texas for the bud, most recently in 2010.