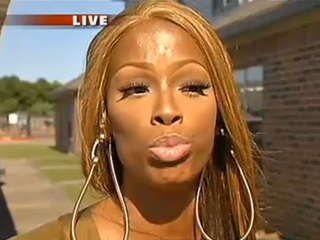 Nomi Mims, the stripper at the center of the lawsuit, says she doesn't owe Robert Wallace anything since the items in question were "gifts." KRIV-TV

Robert Wallace is suing Nomi Mims for not returning a laptop and his Harry Potter DVDs, as well as $2,000. KRIV-TV

At first glance, the story of an exotic dancer, her lonely client and a lawsuit over a laptop, a loan and stack of Harry Potter DVDs seems like fodder for a joke. Strip away the layers and the story, while titillating, is also a sad tale of misplaced affections.

That’s the way Nomi Mims feels at least. The stripper is facing a lawsuit filed against her by Robert Wallace, a 32-year-old Houston software developer who contends she failed to return a laptop, a $2,000 loan and collection of Harry Potter DVDs. A court date is scheduled for June 5 and Mims insists the situation is a misunderstanding.

“I never asked for any of that. I have three laptops, I don’t need another one. He is just hurt and disillusioned,” Mims tells CultureMap. “We were never boyfriend and girlfriend. I wasn’t attracted to him like that.”

Mims estimates Wallace spent $45,000 at a Houston strip club called Treasures where she worked. Although they formed a friendship in the process, Mims says it was platonic on her part and fueled by a sense of pity. Wallace sees the situation differently and told a Houston television station that he and the stripper were dating and had a sexual relationship.

​ “I would like to be his friend, but nothing more. He didn’t buy the girlfriend package,” Nomi Mims says.

“He was a special case. He has no friends. I would like to be his friend, but nothing more,” Mims says. “He didn’t buy the girlfriend package. It’s available, but he didn’t buy it.”

Wallace did, Mims says, give her a debit card that he reloaded for her. He also showed up unannounced to her apartment — a move Mims said unnerved her and made her reconsider his mental state.

“Who just shows up at your house, takes off their shoes and sits on your bed? Who does that? I didn’t want him to feel unwelcome, but I told him we should go our separate ways,” Mims says.

She asserts Wallace began making serious threats and then dropped out of contact, prompting his father to reach out to her through Facebook. Mims said Wallace seems fine, but she’s keeping her guard up and trying to move on.

“I never felt he was a threat, but mental illness is very unpredictable,” Mims says. “Honestly, I’m just so tired of the whole story. I’m just trying to figure out how to pay my rent."

After speaking to media about the situation, Mims says she was fired by Treasures and is having a difficult time finding work to pay her bills and support her teenage daughter. She’s open about the kind of money stripping can earn, but says she’s also had a more conventional job working as a process server. Mims is also contemplating a way to make her dream job a reality.

It involves being on stage, but it’s not what you think. “I would love to do stand-up comedy. I’ve done it before, but once they find out I’m a stripper, they want to date me so I can get the job,” Mims tells CultureMap. “Everybody wants to talk about strippers in a bad way, but everybody sure wants to be one.”

Mims has an upcoming radio appearance, but beyond that, she’s unsure what her next steps will be.

“Kim Kardashian can make a sex tape and next thing she’s in Paris getting married to Kanye. It’s hard for black women to get into comedy, so I don’t know what to do,” Mims says.

Nomi Mims, the stripper at the center of the lawsuit, says she doesn't owe Robert Wallace anything since the items in question were "gifts." KRIV-TV