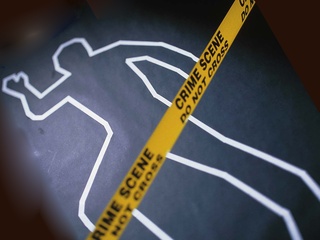 The body of the 83-year-old victim was found around 10 am. SFExaminer.com

The tragic case of an elderly woman's carjacking, kidnapping and murder just got another mysterious wrinkle as Arlington police reveal the 83-year-old was related to a retired member of the force.

Sergeant Vincent Pewitt confirmed the relationship as he addressed the media on Tuesday afternoon.

At about 8:30 am, an 83-year-old woman was driving a silver Lincoln sedan into her driveway in the 400 block of Sussex Drive when an unknown black male approached her vehicle. Pewitt says a neighbor witnessed the confrontation, in which the woman tried to fight back. The witness attempted to intervene and called 911.

The woman's body was found around 10 am in the 1900 block of Kimberly Drive. The cause of death is trauma to the head. The victim's name has not yet been released because her family hasn't been notified of her death. Pewitt says the loss is already affecting the department.

"It’s a traumatic event for us and also for the community," he said.

Around 11 am, Arlington police located the stolen Lincoln outside an apartment complex in the 200 block of Elm Point. The carjacker was nowhere to be found. Police are now processing evidence from the abandoned vehicle and canvassing the area. As of 3 pm, no suspect had been identified.

"We do believe the person might still be in the area," Pewitt said.

Anyone with information on the crime should call 911 or the Arlington Police Department 817-459-5700.