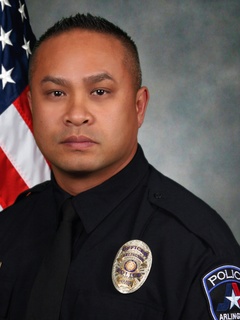 UPDATE: The FBI has released more information in this case. The story has been changed to reflect new information.

Officer Thomas Kantzos, 45, is being held in protective custody at the Tarrant County Jail on federal fraud charges. Officer Craig Hermans, 34, is being questioned in connection with the investigation and has been placed on administrative leave. Kantzos is a 17-year veteran of the force, while Hermans and Vo have spent three years as police officers.

The FBI alleges that Kantzos has been purchasing anabolic steroids and HGH for about five years. Kantzos reportedly sold the steroids to other members of APD and even accessed police databases for the purpose of advising his drug dealer of law enforcement activities.

Arlington is already reeling from four murders in less than a week. Police say none of them appears to be related, but they all remain unsolved.

A man was killed in a sports bar parking lot around 2 am on June 10. John Ross Shreves, 27, was shot in the neck and head. He was an English teacher at Kennedale Junior High School.

An elderly woman was found dead in her home in the 5300 block of Wild West Drive on June 9. Family members told police they had been unable to contact her. Signe Edwards, 67,  had obvious trauma to her body and her death is being investigated as a homicide.

A 19-year-old man was shot and killed in South Arlington around 11 pm on June 5. Unlike in the other deaths, police believe Donsha Hughes may have known the person who killed him. Hughes reportedly received a phone call shortly before stepping outside and being shot.

Another elderly woman was carjacked, abducted and killed on June 4. Leona Faye Swafford, 83, was pulling into her driveway around 8:30 am when a man attacked her. Swafford's body was later found with head trauma.

Swafford's case is the only one with a suspect. Her killer is described as a black man in his late 20s to 30s, around 6 feet tall with short hair and a muscular build. Oak Farms Dairy is offering a $10,000 reward for any information leading to an arrest and grand jury indictment of the person responsible for Swafford's death.

Anyone with information on any of these unsolved crimes is asked to call Tarrant County Crime Stoppers at 817-469-TIPS.