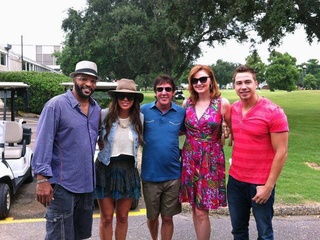 Some form of Kidd Kraddick in the Morning, the morning radio show whose host David "Kidd" Kraddick died on July 27, will air live on Monday, August 5. Representatives from the show's parent company, YEA Networks, don't know yet what form that will be.

That uncertainty didn't stop management from emailing stations around the country that air the show, stating that it felt confident the show would go live on Monday morning, with cast members such as Kellie Raspberry and Big Al "doing a few live breaks."

At Louisiana FM radio station B97 New Orleans, which has the August 5 announcement posted on its website, DJ Jammer says that they've been reassured that some live show will be aired.

"I'm hoping we're showing that they have loyal listeners and that it's worth keep the program on," says petition organizer Jessica Flores.

Jammer is also the person who took the photo, now widely circulated, of Kraddick arm-and-arm with his crew, hours before his passing.

"I'm still spinning at this point," Jammer says. "And our audience here in New Orleans is so emotionally wrapped up in it."

Meanwhile, cue the jubilation from Alberto and Jessica Flores, the Fort Worth couple responsible for launching not only the RIP Kidd Kraddick Facebook page but also the online petition begging YEA to keep the show alive. Job well done, Alberto and Jessica!

"Someone sent me a screen shot of the email, saying that they will be back on the air on Mondays," Jessica says. "I'm hoping we're showing that they have loyal listeners and that it's worth keep the program on."

Both avid Facebookers, she and her husband started the RIP page as soon as they learned of Kraddick's passing. Jessica says they expected "maybe 500 people" would like it. The Facebook page currently has 260,000 followers, and the petition has garnered nearly 47,000 signatures.

"We did the Facebook page, and by the next afternoon, it had 20,000 followers already," says Jessica, a stay-at-home mom. "It was so unexpected. I started freaking out — to get so many people commenting, sharing heir stories, and hundreds of messages."

Jessica's gratitude stems from a personal connection: Her cousin is DJ Jammin' J, who got his first break from Kraddick.

"Kidd helped him get his DJing out there by featuring him on his 'Flush the Format' show one Friday," Jessica says. "They let him come on and DJ one Friday morning. But I have always listened to Kidd, ever since I was young."

The response has been like an avalanche, she says. "It's been almost overwhelming, but when I saw how many people cared about Kidd, that he's touched so many people's lives, I started to feel joy."