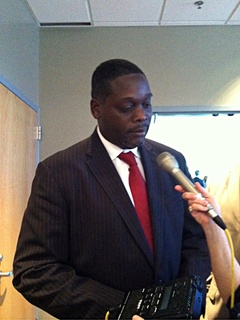 The latest round in this ongoing game of badminton: a letter from Hill's attorney George Milner. Written on August 13, the letter slaps back at a statement from the Dallas DA's office that a federal investigation into political benefactor Lisa Blue has concluded.

The investigation stemmed from Hill's accusations that Blue had improperly influenced Watkins in his office's decision to seek criminal indictments against the Hills. The case is now in the hands of U.S. district judge Jorge Solis.

George Milner says there is still an active FBI and Department of Justice investigation into Blue's role in Hill's indictment.

Blue's attorney, Terence Hart, declared his client free of federal suspicion in an August 9 pleading. "Blue is no longer under investigation, and the investigation regarding Blue is closed," Hart wrote. Additionally, Dallas DA spokesperson Debbie Denmon touted the pleading as proof that Blue was "cleared of any wrong doing."

Milner disputes the assertion of innocence; in his letter to assistant U.S. attorney Shamoil Shipchandler, he writes:

It appears that Ms. Blue and the Dallas Co. DA's Office are attempting to mislead a federal judge and the public into believing that the FBI and the Department of Justice have concluded their investigation into these matters, and have somehow 'exonerated' Ms. Blue of any wrongdoing. It is our understanding, however, that this is untrue.

Milner goes on to say that "there remains an open and active investigation by the FBI and Department of Justice into these matters, and that the investigation has not cleared anyone of wrongdoing."

Katherine Chaumont with the Dallas FBI would not confirm or deny the status of an investigation into Watkins and/or Blue.

In an statement, Denmon stood by the DA's previous belief that the investigation into Blue had closed.

The Dallas DA's office has confidence in the accuracy of Attorney Terence Hart's statements. He is a former FBI agent who has first hand knowledge — swearing under oath in an affidavit about how the Feds cleared his client, Lisa Blue, of any undue influence in the Hills' indictment. The bottom line is a Dallas County grand jury indicted Al Hill III and we look forward to his day in court.

Using the same tactic as Hart, Milner requested that the U.S. Attorney's Office contact him by 5 pm August 13 if his understanding of the investigation was incorrect. Having received no such communiqués, Hill's legal team filed the letter along with a response to Hart's supplemental evidence document, which asserted Blue was no longer being investigated.

All of this comes on the heels of state district judge Lena Levario's August 2 allegation that Watkins and Blue engaged in a conspiracy to indict Hill. In 38 pages of findings and conclusions, the judge said that Watkins and Blue worked in tandem against Hill. Levario also questioned the credibility of several other members of the district attorney's office.

Milner wants Levario's findings to be considered evidence in the Hill's legal fee dispute with Blue, but her attorney maintains they are not relevant.

"Judge Levario's detailed findings are highly relevant and should be considered by the court," the response reads.