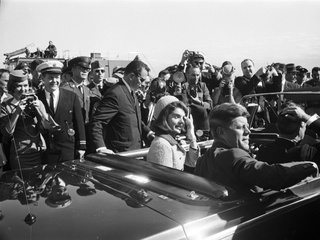 November 22, 2013, is the 50th anniversary of the JFK assassination in Dallas. Photo courtesy of Fort Worth Star-Telegram Collection, Special Collections, The University of Texas at Arlington Library

Images of the assassination of President John F. Kennedy are never far from mind in Dallas, but a new video attempts to strip away some of the chaos of the November tragedy.

Using stabilized Zapruder footage of the actual event, a New Zealand computer graphics engineer has created an HD panoramic video with about 500 frames. The two-minute video sets the scene with images of the crowd at Dealey Plaza and a police escort before the president and first lady drive past the grassy knoll.

Around the 18-second mark, a bullet strikes JFK, and his wife scrambles to the back of the car. Though we know what's going to happen, it's still a chilling scene.

As Gizmodo points out, YouTube user AntdavisonNZ inserts his own computer-generated frames to connect all the scenes together, so it's not an entirely true representation of the assassination. It's eerily real nonetheless.

One week from today, on November 22, the City of Dallas and the world will commemorate the 50th anniversary of JFK's assassination. Mayor Mike Rawlings will speak at the ceremony, along with JFK scholars and other guests. The event is open to the public, though ticketing has already closed.