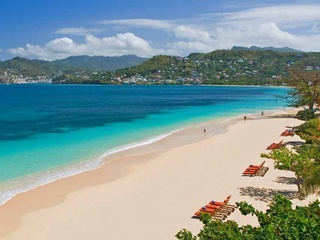 Grenada isn't a bad place to end up by mistake.

1. Man sues British Airways for sending him to Grenada instead of Granada. We can't decide what is more unbelievable in this story — that the passenger never checked the destination on his ticket or that some people still use travel agents to book flights.

3. American student rescued from giant vagina sculpture. It took the efforts of 22 firefighters to pry a male American exchange student from a vagina sculpture in Germany. The student was photographed while wedged inside the red marble structure, which weighs 32 tons.

4. Daughter's adorable letter to Google gets her dad a week of summer vacation. The working world can be a grind, especially at technology giants like Google. But never underestimate the power of crayon and kid-logic to score some time off.

5. Dads respond to Disney's Frozen with catchy tune of their own. In this Disney-themed parody video, two dads explain their love-hate relationship with children's movies. The song is resonating with parents everywhere, and, ironically, it will probably get stuck in your head for the next week.

Grenada isn't a bad place to end up by mistake.