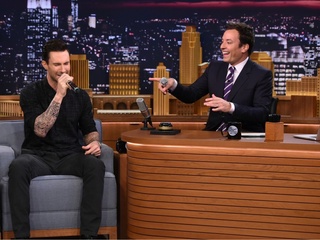 Adam Levine is a skilled impressionist. Photo via YouTube

2. Wheel of musical impressions with Adam Levine. Even though the Maroon 5 frontman has a signature sound, it's clear Adam Levine isn't a one-trick pony. His skills at Wheel of Musical Impressions put even Jimmy Fallon to shame. And that's no easy feat.

3. Lego academics is Twitter's latest and greatest new account. School is officially back in session, and that means teachers everywhere have come down from their summer highs to hit the books. The account @LegoAcademics shows work can be fun with impeccably photographed tweets and witty scholarly banter.

4. Sam Smith's "Stay With Me" remixed into '40s jazz standard. The brooding ballad from Sam Smith would be the song of the summer if it wasn't so dang sad. The folks at Postmodern Jukebox work their magic and jazz up the tune a bit.

5. A closer look at the drawings on Angelina Jolie's wedding dress. ICYMI, Angelina Jolie and Brad Pitt got married in France, and the bride wore a wedding dress decorated with drawings made by the couple's six children. Oh, you already knew that? Well, I bet you didn't get as close a view as Funny Or Die did.