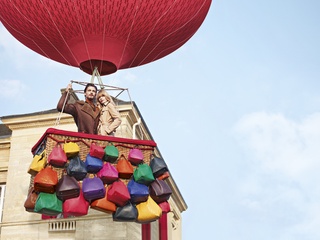 Fifty looks from CH Carolina Herrera collection will be featured in a special runway show February 14 in New York. Courtesy of American Express

Carolina Herrera will headline a show exclusively for American Express cardholders on the last night of Mercedes-Benz Fashion Week. Photo courtesy of The Tents

Now here's the ultimate Valentine's gift for your favorite fashionista. Carolina Herrera, a favorite of the high-fashion crowd, will be front and center on the final night of Mercedes-Benz Fashion Week on February 14. American Express is hosting a fashion show exclusively for its cardmembers, featuring 50 looks for men and women from the designer's CH Carolina Herrera collection at the Lincoln Center tents in New York.

Before the show, Herrera will offer an insider's view of the fashion world in a question-and-answer session. In collaboration with Harper's Bazaar, five top looks from the show will be available immediately on ShopBazaar.com, the magazine's shopping site.

In collaboration with Harper's Bazaar, five top looks from the show will be available immediately on ShopBazaar.com.

Hailed as "Fashion’s First Lady," Herrera was named the CFDA Womenswear Designer of the Year in 2004 and honored with the Geoffrey Beene Lifetime Achievement Award in 2008. She has a namesake boutique at Highland Park Village.

Tickets are available online for American Express cardmembers. The first and second rows are sold out, but other runway seats are available for $100, and media riser access at the end of the runway ranges from $100 to $175 per seat.

Although it's practically impossible for the general public to attend a runway show during Mercedes-Benz Fashion Week, the credit card company hit upon the idea of creating a show for its cardholders featuring famous designers. The concept has been wildly popular, with such designers as Tommy Hilfiger, Zac Posen, Donna Karan and Rachel Zoe.

AmEx also offers a popular package called the Skybox Experience for its Platinum Card and Centurion members. Cardmembers view runway shows from a private viewing suite at Lincoln Center and take part in Q&A's with noted designers, editors and buyers.

Most of the VIP packages are sold out, but tickets remain for Tadashi Shoji, Project Korea, the Academy of Art University and Vantan Tokyo. Also, AmEx offers chances to see shows at Milk Studios in Chelsea during fashion week. A limited number of packages remain.

In addition to the American Express show, Herrera will showcase her fall 2013 line for the fashion press and invited guests on February 11.

Fifty looks from CH Carolina Herrera collection will be featured in a special runway show February 14 in New York. Courtesy of American Express