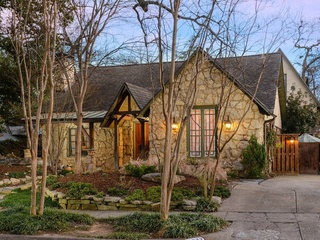 Spend your remodeling money on curb appeal, because you'll get it back — and then some. Photo by Ebby Halliday/Stephen Reed

How much money are you going to recoup on that recent master suite addition? Perhaps the 2015 Texas Remodel Valuation Report has the answer.

Released April 1 by the Texas Association of Realtors, the report analyzes the recoup costs in 2014 for more than 20 remodeling projects for six cities: Dallas, Austin, Houston, El Paso, McAllen and San Antonio. It also looks at nationwide trends.

In general, the research shows that functional projects are a much better investment than upscale remodels and additions.

A frivolous sunroom is the last place you want to spend your money, as the return was only 42.6 percent of the total cost in Dallas and as little as 29.3 percent nationwide. Others in Dallas’ bottom five are home office remodel, fiberglass entry door replacement, upscale garage addition and upscale composite deck addition.

So where should you sink your hard-earned pennies? Hands down, the most profitable remodeling projects boost a home’s curb appeal.

In Dallas, roofing replacement was No. 1, recouping 114.5 percent of the total cost. Another winner: window replacement, which delivered a return of 102.1 percent. These also took the Nos. 1 and No. 2 spots, respectively, for top projects by growth in recoup cost from 2013-14.

Steel entry doors and garage door replacements are other sound decisions, which ranked among the top five projects nationwide and in Dallas.

You can see the full report on the Texas Association of Realtors website.