Starbucks caves to coffee drinkers' demand for another nondairy option 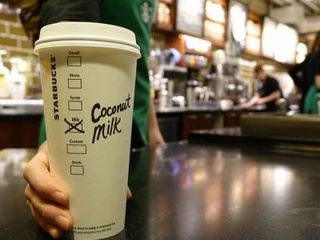 Starbucks will have coconut milk in all stores on February 17. Photo courtesy of Starbucks

After being deluged with requests, Starbucks is introducing a new nondairy option to its drink lineup: coconut milk. It will be available in all stores beginning February 17.

According to a release, the desire for an alternative to dairy and soy was the second-most requested customer idea of all time at MyStarbucksIdea.com, its customer-feedback site, generating more than 84,000 votes.

The pleas for an additional nondairy offering have been coming in daily from customers, ramped up further ever since Starbucks offered coconut milk in a limited trial in October 2014. Starbucks first began testing coconut milk at stores in Portland, Oregon, followed by Cleveland and Los Angeles.

Starbucks' coconut milk is vegan, made from single-origin coconuts from the tropical Indonesian island of Sumatra.

But Starbucks' R&D team found that coconut milk was the best complement to Starbucks hot, iced and Frappuccino beverages because of its rich and creamy texture. It also has more widespread appeal than almond milk, because many people have nut alleries.

A staffer at the Starbucks in West Village said that they've had the coconut milk for a week. "We got it a week in advance, I guess to let us get used to working with it," she said. "We haven't advertised it yet, but we know it will do well because everyone has been asking for nondairy products besides soy."

She said that getting it to foam for cappuccino drinks is a little more challenging than soy or regular milk. "It doesn't foam quite as well, but it's a lot better than almond milk, which is too watery," she said.

Frisco: The go-to place for families is a favorite for this pair of top agents
Lakewood Heights: Where the architecture is as diverse as the residents
Idlewild: University Park’s walkable wonder