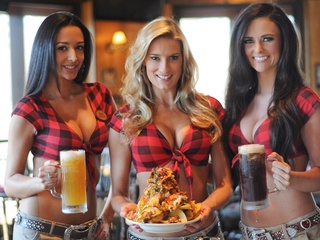 Well, there goes the neighborhood. Mockingbird Station takes a not-so-small step away from indie-theater coolness with the announcement of its latest new tenant: Twin Peaks will open in the space next-door to the Angelika Theater.

The breast-centric bar-restaurant will open this summer in suite 240, with two full-service bars, 32 taps, an outdoor patio with not just one but two fire pits, and, according to the press release, "countless high-definition televisions." Countless as in, so many that they cannot even count them.

But whatever your feelings about the breastaurant trend, one wonders how many bars Mockingbird Station can take. The center already has Trinity Hall, People's Last Stand and, one level down, the also-corporate-ish Mockingbird Taproom.

Suite 240 is the space that used to be Deux Lounge, which closed in 2011. Last spring, the space was borrowed by the Dallas Film Festival as a lounge, where it hosted after-parties and VIP events.

For the quintessentially suburban Twin Peaks, this is its first encroachment inside the loop, with the closest branch up until now in Addison. Be afraid, city of Dallas! Be very afraid.