Going to the Hot Dogs
Mutts Cantina set to open in Uptown with hot dogs and dog park
LATEST NEWS
Where to shop in Dallas right now: 8 must-hit stores for August
Get It to the Greek 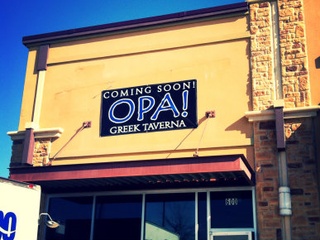 Veteran diners might remember Opa Grille in North Dallas, a well-regarded Greek restaurant that closed in 2011. Owner Charlie Venetis has retired, but the food was good enough that nostalgia lingers in many circles.

Opa Greek Taverna, opening next week in Rowlett, is not directly connected, other than the fact that owner Kostas Lazanas worked with Venetis when he was young.

"I had a chance to train with Charlie and worked for him when I was a kid," Lazanas says. "Opa Greek Taverna is not related to Opa Grille. But I've always loved the expression and what it means." (Loosely translated, it means "You go!")

The restaurant is in a space on Lakewood Parkway near Rowlett Road and 66 that was previously a Chinese restaurant. The menu features roasted chicken and assorted meat platters and pita wraps with gyros, falafel, skewered chicken, lamb and loukaniko (spicy Greek sausage). Greek comfort dishes are covered via moussaka and pastitsio, and there is both lemon and lentil soup. The wine list includes Greek wines such as retsina, Moschofilero and Assyrtiko.

Lazanas says he's getting help in the kitchen from a chef at the old Vincent's Seafood on Midway Road, which closed a few years ago. (There is still a Vincent's in Plano.)

Lazanas' experience does not stop at Opa. He's worked at most of the other local Greek restaurant legends, including Platia Greek Kouzina in Frisco and Zorba's in Plano. [UPDATE: Sally Maglaris, owner of Platia Greek Kouzina, says that Lazanas did not work at her restaurant, despite his claims.]

"My father is Greek; I like to say that I'm half Greek and half redneck," Lazanas says. "I've been working for the past five years saving money toward my own venture. In Dallas, it's one big Greek family."