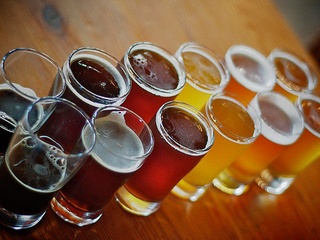 Division Brewing will take a "sno-cone stand" approach to its brewing lineup.

With every town lined up to get its own brewery, the time was ripe for Arlington, and here is Division Brewing to make it right. Opening at 506 E. Main St. in Arlington's old downtown, Division will be the mid-city's first locally owned and operated brewery, from a team with years of home-brewing experience.

Founder Wade Wadlington, who's had a career in banking and technology, began brewing in the garage; neighbors would come by, and it grew from there. Brewer Sean Cooley is a barista and ardent home cook who bakes sourdough bread, pickles vegetables, makes cheese — and brews sour beers.

"When the craft beer scene began taking off, I realized that if I were ever going to do this, this was the time," Wadlington says. "I've been commuting 25 years, and I wanted to do something in my own backyard."

He was encouraged by the fact that Arlington still had no brewery. "I have friends here, and the support of my neighbors, and that kind of bolstered me," he says.

"A lot of breweries are producing great beer, but they're doing four or five beers and a couple of seasonals," Wadlington says. "I want to be the sno-cone stand of breweries. When you go to a sno-cone stand and see all those different flavors and colors, that's what our goal is."

Their favored brews are complementary.

"My wheelhouse is dark porters, stouts and IPAs," Wadlington says. "Sean is a sour brewer; he's into saisons and farmhouse ales. He's got some fabulous beers — peach sour, plum sour — he's really good at meshing fruits. He could compete with anything you see on the West Coast. We'll run the whole spectrum."

They've rented a warehouse, the former home to Lone Star Comics, and they are now in the permitting process.

"It's great to be in downtown Arlington. There's a lot of things going in, with the Levitt Pavilion, and I'm excited about Arlington reestablishing a downtown," Wadlington says. "If everything goes as planned, we should be open in late August or early September.

"Arlington has a reputation as only having chains, with no interesting restaurants. We're hoping to bring some of that independent culture to Arlington. The little local brewer, creating interesting stuff."

Delight everyone on your holiday list with these gorgeous gift ideas