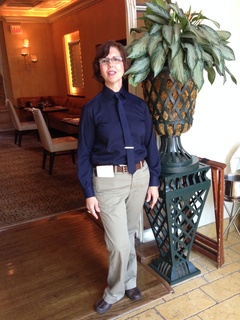 Dallas institution the Rosewood Mansion on Turtle Creek, one of the city's last holdouts on formality, got a little less formal in the uniform department. The latest look for the servers has them garbed in a casual ensemble of button-down shirt and khaki or black pants.

Spokesperson Stephanie Faulk says that the uniform switch-over took place two weeks ago and follows a general direction the hotel-restaurant has been taking. "It's just part of the overall look and feel of approachability," she says.

"It's just part of the overall look and feel of approachability," says spokesperson Stephanie Faulk.

During breakfast and lunch, the uniform consists of a blue shirt and tan khakis, a combo that might not look out of place at a Rainforest Cafe. At night, the staff gets a little more monochromatic with black slacks, black button-up shirt and black tie — a look that Faulk calls chic and clean.

"Ever since we did our  renovation seven or eight years ago, there's been a gradual relaxation toward approachability," she says. "We stopped using white tablecloths on the tables. We have mahogany tables, and those were designed to be displayed."

They still use tablecloths on the veranda and in the library.

The restaurant's biggest shift was when it stopped requiring customers to wear a jacket and tie and began to allow jeans, which had been previously forbidden. And, for many years, servers wore tuxedos.

"Times are changing," Faulk says. "Guests aren't looking for that. They're looking for something more modern."