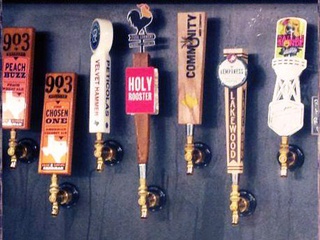 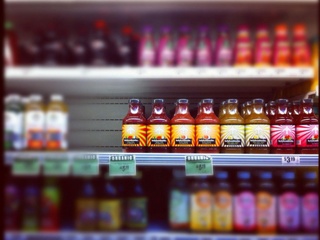 If all goes well, the kombucha-beer hybrid could be packaged for sale on store shelves. HOLY Kombucha/Facebook

The beer is a friendly 2.8 percent ABV and has a prickly pear flavor — like one of Holy Kombucha's bottled drinks, but with a little alcoholic kick. According to Holy Kombucha founder Leo Bienati, the partners are seeking feedback from kombucha fans and beer fans alike. If it turns out to be successful, they'll make more.

"We would love to see this in packaged format in the near future, but there's a lot to learn in this process," Bienati says.

Bienati's tasting notes describe it as offering fruit tartness and funky tones, but without heavy sugar. It has a fragrance of honey-lemon, berry and earth, and a finish of citrusy, lemon-zest, honey and mild prickly pear sweetness.

He's reluctant to call it a sour but says it could fall, loosely, under that umbrella. For beer brewers, the problem with sours is that they have bacteria that can contaminate the brewing equipment.

"We've had to work closely and carefully on bringing the two together without infecting our system," Bienati says. Without offering much detail, he says it's a mix of a finalized brewed batch of beer with a completed batch of kombucha that is also somehow brewed together.

"Balancing the two to achieve our flavor target has been the biggest challenge," he says.

Kombucha's appeal lies in the beneficial aspects of its bacteria, which Bienati says can survive in the beer medium, but they don't know how long. "We want to keep the benefits intact," he says.

Though this is the first such hybrid in Dallas, it's not the first kombucha beer ever; that honor goes to Unity Vibration in Ypsilanti, Michigan, who introduced two kombucha beers in 2010.

If Holy Rooster Prickly Pear Kombucha Beer sounds good to you, you should try it sooner rather than later. For now, it's a limited-edition release that's expected to last only a couple of weeks.

It is available on tap at select Whole Foods Markets (Park Lane, Lakewood, Highland Park, Colleyville and Addison); at Luck restaurant in Trinity Groves; and at the Bottle Shop on Greenville Avenue.

Preston Place: University Park's idyllic, tight-knit neighborhood
East Dallas: An established, walkable neighborhood with character
Lakewood Heights: Where the architecture is as diverse as the residents