This week in gluttony
Oscar parties and gluten-free crawls: The best food and drink events in Dallas this week
LATEST NEWS
P.F. Chang’s to debut 3 of its new To Go concepts in Dallas-Fort Worth
Sports Bar Reinvented 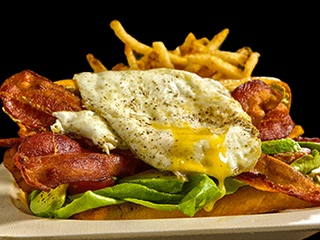 "The Belt" sandwich has bacon, lettuce, tomato, avocado and an egg. Hey, so that's where the E went! Courtesy photo

Mash'd guacamole comes spiked with corn, bacon, grilled pineapple, tomato and jalapeños, and it is served in an appealing newspaper-type wrapper. Courtesy photo

Like a hillbilly cousin of TruFire Kitchen & Bar, the new Mash'd – a restaurant-sports bar opening November 7 in Frisco – is missing something. Namely, the letter E.

Mash'd may not spell so good, but it knows its moonshine, and its better-than-the-usual-sports-bar food will be made from scratch.

It represents a collaboration between David Kazarian and Jay Clark, founders of the expansive Mediterranean-Italian chain TruFire, and Robert Wechsler, an entrepreneur with corporate experience in the restaurant world. Nursing a yen to get into the business more directly, Wechsler bought the Dodie's at 3401 Preston Rd. to develop something new, in partnership with Kazarian and Clark.

"We wanted to have a place with from-scratch food and a great atmosphere where you can hang out with your family if you want to," says co-owner Robert Wechsler.

"I knew David and Jay from dining at TruFire; they're great restaurateurs," Wechsler says. "We kicked around a number of concepts and came up with this opportunity to invent something that hadn't been done here. Something that was the essence of America, with a trend-setting spirit, food, mixology, culture and attitude."

In other words, a nice sports bar.

"In Frisco, if you want to go to a sports bar and have good food, nothing exists," Wechsler says. "The sports bar options are not very family-friendly. We wanted to create a better version of the sports bar."

"The bottom line is that women like sports too," Wechsler says. "We wanted to have a place with from-scratch food and a great atmosphere where you can hang out with your family if you want to. Right now, if you want a sports bar, you gotta go to a breastaurant."

The Mash'd menu has your nachos, wings and hummus. But it also has white bean hummus; fried pickled vegetables with "nuclear" dipping sauce; a $9.95 queso with Abita beer, andouille sausage and pickled pepper relish; guacamole with corn, bacon, grilled pineapple, tomato and jalapeños, served in a rustic paper wrapper; and baked goat cheese with mixed-berry marmalade.

Salads include a Caesar, chop salad, an avocado salad, and a kale salad with watermelon and pistachios called the Dynamelon. Tacos run from $12.95 to $18.95, with choice of shrimp, chicken, steak or cheeseburger. Sandwiches include grilled cheese, cheeseburger, BLT, blackened chicken, turkey and ribs.

There's a Cajun-style "Shake It Up Seafood" with boiled shrimp and snow crab, served in a bag with potatoes and corn, priced by the pound from $16.95 to $28.95. Entrees include fried chicken, BBQ salmon, smoked macaroni and cheese, ribs, angel-hair pasta with shrimp, and flat-iron steak.

They're also bringing in a trend that's on the rise nationally but has not been seen locally, Wechsler says: moonshine.

"We're taking moonshine and other spirits and highlighting them, versus the 'I want a draft beer and chicken wings' approach," he says. "We're creating a moonshine bar. Moonshine is trend-setting, but it hasn't appeared here. We have a locally owned distributor of moonshine with all the different flavors."

They have about 30 moonshine flavors such as Georgia Moon Corn Whiskey, Midnight Moon Cherry, Firefly Apple Pie and Ole Smoky Peach, plus an array of cocktail suggestions such as the Russian Hillbilly with Firefly Caramel, Kahlua and vodka.

"Behind the scenes, I call it a sports bar version of TruFire," Wechsler says.

"The Belt" sandwich has bacon, lettuce, tomato, avocado and an egg. Hey, so that's where the E went! Courtesy photo