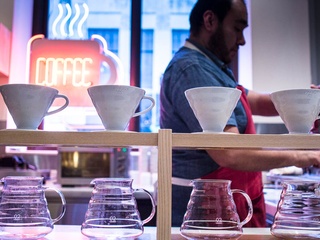 Dallas has seen a proliferation of independent coffeehouses in the last couple of years, places dedicated to procuring the best beans and machines to create that perfect cup.

Weekend at The Joule hotel, a sibling establishment of its lobby-mate TenOverSix, is one such place. In addition to creating an atmosphere that invites settling in and staying awhile — courtesy of a superiorly styled lounge outside its door — Weekend holds monthly classes to help its patrons brew better coffee at home.

In the video above, manager Nicole Thornbrough walks us through the pourover method that has become so popular among coffee enthusiasts, one they use at Weekend. Despite the rise of fancy machines — and weekend has those too — Thornbrough explains how this technique, in which hot water is poured slowly over just-ground coffee through a special V60 ceramic cone, produces a quality cup of java.

Even though Weekend has a fancy pourover setup so you can watch the coffee drip as the baristas do their thing, Thornbrough promises this is just as easy to do on your own. Simply place the cone (available for less than $25 at Weekend and elsewhere) over your mug of choice, which is how she does it at her own house.

For more coffee tips like these, join Thornbrough on the third Sunday of the month for Weekend’s home-brew class. The next one is January 18, 3-5 pm.