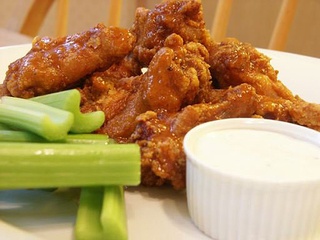 New York-based Duff's Famous Wings, perhaps the best-known name when it comes to Buffalo-style chicken wings, will open its first restaurant in Texas in February, on Southlake Boulevard in Southlake.

Founded in a suburb of Buffalo, Duff's has been serving classic Buffalo-style wings — hot red sauce, celery sticks, blue cheese, the works — since 1969. There are four branches in New York and three in Toronto, which is where Ron Peddicord — who, along with two partners, bought the franchise for Texas — first encountered it. President Barack Obama stopped there in 2010.

"I lived in Toronto for 10 years, and then we moved down here, and my two kids would say, 'Dad, we can't get any good wings down here,'" Peddicord says.

Founded in a suburb of Buffalo, Duff's has been serving classic Buffalo-style wings — hot red sauce, celery sticks, blue cheese, the works — since 1969.

Sticklers might know that the chicken wing was originally conceived by Anchor Bar in downtown Buffalo. But in 2010, the Travel channel came along with a show called Food Wars, pitting Anchor Bar against Duff's. Duff's won narrowly by a 3-2 vote.

"That's when the guys at Duff's started thinking about franchising," Peddicord says.

But, really, isn't one wing just like another (we ask accommodatingly)?

"A few things make Duff's different," Peddicord says. "They buy only fresh wings, and that separates them from a lot of places that buy frozen. The second thing is that they use only AA jumbo, which is the biggest size you can get.

"And then they have a subtle technique in preparing them that is key to their crispness. Because that's what people say when they first try them. 'Wow, they' re big.' And the second thing they say is, 'I like their crispness.'"

Peddicord and his two partners — one a tech guy, the other a former manager at Hooter's — will also play up the family atmosphere.

"Most wing joints are sports bars that serve wings, but ours is a family-style wing joint, just like the place in Buffalo," he says. "We'll have beer and wine, but we want it to be a place where you bring your family or sports team."

While some of the Duff's have servers whose style follows that of Hooter's and other breastaurants, Peddicord says that his will not. The Southlake location is taking over an old Qdoba space just off Route 114.

"The main reason we're in Southlake is that this is where we live, and we wanted to have a place where we could perfect our model before we roll it out," Peddicord says.

"If we're going to be there all the time, we might as well have it be close to home. But it also met our desire for the kind of area we want to be in. But we're looking around Dallas-Fort Worth."