John Tesar breaks down the menu at Spoon, his new seafood spot in Preston Center

John Tesar breaks down the menu at Spoon, his new seafood spot in Preston Center 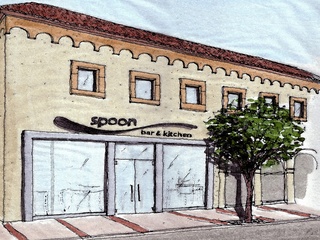 A rendering of Spoon restaurant, coming to Preston Center in November. Photo courtesy of Spoon

In a season busy with openings, Spoon stands out, thanks to the colorful reputation and kitchen chops of its chef, John Tesar. Spoon is slated to open in November in Preston Center, in the old Tramontana spot, with an emphasis on seafood but with what Tesar calls an austere, almost Asian mindset.

"It's going to be an accumulation of what I’ve learned over the years and an opportunity to have the freshest fish in a land-locked place," he says. "Everything will be simple and straightforward. If you enjoy Japanese restaurants, you’ll enjoy Spoon."

Spoon's profile will rise in November after the premiere of Top Chef Seattle, on which Tesar is a contestant (and about which he was unable to comment).

"I'd like to give Dallas its first real seafood restaurant," Tesar says. "There's not a lot of them anywhere in America."

Tesar came to Dallas in 2006 to replace Dean Fearing at the Rosewood Mansion on Turtle Creek. Most recently he was running the kitchen at The Commissary in One Arts Plaza, where he used C-vap machines in a novel way to cook burgers. (Stephan Pyles is using C-vaps at Stampede 66.)

Tesar left The Commissary in January 2012 to focus on Spoon, a 58-seat bistro that he says will be a return to Mansion-level fine dining but with a more casual vibe.

"I want to continue with what I did at the Mansion but reinvent that for all generations," Tesar says. "I've had a wonderful time here in Dallas. When you replace a guy like Dean Fearing, that's kind of a wow moment in your life.

"I did a couple consulting jobs, and that's been good, but I got tired of the idea of moving around. The next thing had to make sense and be well-funded and be about a chef doing what he does."

Spoon will emphasize seafood sourced from top purveyors. Dishes will include a few surprises.

"I made the decision before I went to do Top Chef to do a place with seafood highlights and with simple fish," he says. "It'll be seafood sourced from suppliers and connections I made from working at Rick Moonen's RM Seafood. As if Le Bernardin came to Dallas, but not so fancy schmancy.

"I'd like to give Dallas its first real seafood restaurant. There's not a lot of them anywhere in America. You have to go to Boston or New York or San Francisco or Seattle to get good seafood."

​ Geoduck, pronounced "gooey duck," is one of the largest clams in the world. It'll be an offering on the raw crudo bar.

Tesar will buy all of his fish on the bone, rather than pre-cut, so he can use the entire animal.

"We'll observe a whole process to the fish," he says. "The first day you eat it raw, the second cooked, the third day smoke it."

The menu includes caviar, chowder, smoked eel and geoduck. The latter, pronounced "gooey duck," is one of the largest clams in the world. It'll be an offering on the raw crudo bar.

"The caviar, I'm not sure how many orders we'll get, but I enjoy eating it and garnishing food with it. I figured we might as well let people experience it," he says. "It's there for the high-rollers who want to go for the Dom Perignon. But one thing we won't have is shrimp — cocktail or towers."

His chowder recipe incorporates black truffle. "That's how we did it [when I went to school] in Paris," he says. "You have potatoes, oysters, reduced cream, truffle — it's a real traditional oyster stew spruced up with black truffles."

The smoked eel, from his hometown in the Hamptons, comes with something called "head cheese" pickled squid.

"We used to comb for eels. We'd catch horseshoe crabs and put them in traps," Tesar says. "My parents are Eastern European, so I've been eating head cheese for a long time. My mother used to make jellied eel with smoked eel.

"We're doing squid with smoked eel in a tomato water. We'll jellify it with the pickled tomato water until it's the consistency of pork belly, add some diced tomatoes, and you have 'seafood head cheese.'"

As a Northeasterner, he saw many a lobster roll in his youth and featured one as a special at The Commissary. But, for him, lobster rolls have become too common.

"The lobster roll is a Dallas thing now," he says. "We're doing a lobster lasagna. We're not using cheese. We'll whip lobster and butter together and use chunks of lobster and fine herbs as the filling."

Singapore-style lobster chili was inspired by a dish he had at Marc Forgione's in New York. "Lobster chili crab is a signature dish of Shanghai, and I love the flavors," Tesar says. "It's almost a Southwestern dish. But the way we do it, we won't make you eat it out of the shell. It'll be pan-roasted and served with Texas toast."

He attributes two dishes to other chefs. Big eye tuna with foie gras comes from Eric Ripert of Le Bernardin; Tesar credits chef Michael White at Morea in New York with the fusilli with octopus and bone marrow in red wine.

"I love the unctuousness of the octopus braised in the red wine," he says. "I take blue claw crabs and make a marinara sauce with the crab essense, then fold in octopus. We're making all our own pastas here; we bought a pasta maker. It's roped Italian pasta finished with gremolata and fresh breadcrumbs."

They're also making their own bread, including baguettes, with recipes developed by Joe Baker, formerly of the Mansion and currently a teacher at Le Cordon Bleu.

Tesar will cook drumfish crusted in salt, reprising a technique he once used at the Mansion. In another dish, he pairs pork belly with Maya prawns.

"I love them because they're meaty and firm, not soft and mealy," he says. He'll cook them over a charcoal grill he's built, which has a rotisserie attached. It's one of an artillery of tools, along with a C-Vap and a smoker.

"You burn charcoal in the grill and you can roast a whole fish, like a whole pig," he says. "It's taking that Southern mentality and bringing it to seafood."