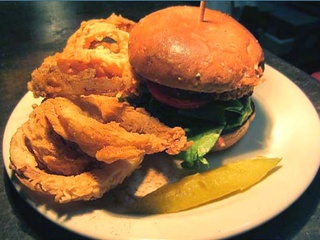 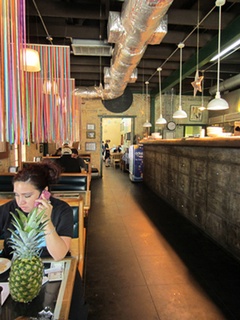 Green, the highly rated vegetarian restaurant chain-let (two branches) in San Antonio, came this close to leasing the old Pho Colonial space in North Dallas this week. But the deal got shut down by the leasing company at the last minute.

Vegetarians, hold fast: The close call has only stiffened the resolve of brother owners Chris and Mike Behrend to open a branch in Dallas this year.

The Behrends thought their application for the space at Frankford Crossing Shopping Center, at the northeast corner of Frankford Road and the Dallas North Tollway, was a done deal. (Pho Colonial closed in May.) But, inexplicably, the leasing agent, First Allied, canned it.

"It just happened on Thursday," says Chris. "We put in our application and gave them the money, but apparently they decided to sit on it and wait. Even our Realtor said he couldn't understand what happened. We weren't telling anybody, but as of yesterday, it fell through."

"We put in our application and gave them the money, but apparently they decided to sit on it and wait," says Green co-owner Chris Behrend.

An agent at First Allied says that the space in question — a 3,000-square-foot end-cap unit on the inside corner of Frankford and Pear Ridge Lane — will be leased to a doctor instead, explaining that the reason for the last-minute change was "confidential" and that it "just didn't work out."

Behrend says they'll continue to look for space. "We'll be up in Dallas in a year or so, no question," he says.

This is excellent news for Dallas' vegetarian community, whose current choices consist of Spiral Diner, Kalachandji's, a few Indian and Asian restaurants such as Veggie Garden, and a couple of veggie dishes at Sundown at the Granada.

Green's two locations in San Antonio are beloved for serving delicious and affordable vegetarian comfort food, with a focus on promoting healthier choices and an environmentally friendly way of doing business.

The Green menu is American with Mexican accents and includes stir-fries, quesadillas, "burgers," wraps and smoothies — most priced below $10. There is a tofu version of buffalo chicken, with a fiery red sauce, and a portobello "steak" with caramelized onions that comes with mashed potatoes, kale and A1 sauce. Chicken-fried "steak" is really seitan, a meat substitute made of wheat, smothered in brown gravy.