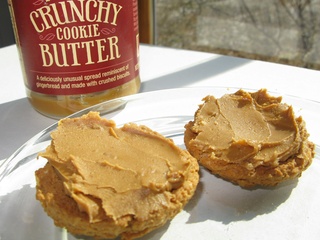 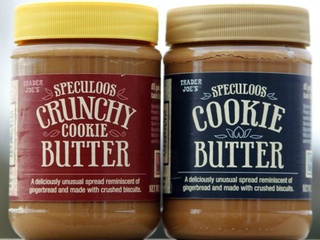 With Trader Joe's now in Texas, we can track their new products in our own backyard. The best-seller of 2012 was Speculoos cookie butter, a peanut-butter-ish spread made of crisp "speculoos" cookies, ground into a paste. It sounds weird until you try it; many are won over by the flavors of caramel, burnt sugar and gingerbread.

Like many Trader Joe's items, the cookie butter is a knock-off of a brand-name product: Biscoff spread, manufactured in Belgium by a company named Lotus. Made from thin, crispy cookies called speculoos (or spekulaas) that are eaten during the holidays, Biscoff's cookie butter premiered in Europe in 2007. They sell it at the World Market chain and at Central Market.

But it wasn't until Trader Joe's introduced its version in 2011 that cookie butter became such a Big Deal.

Biscoff describes it as a "delicious European alternative to peanut butter," but that's not a fair comparison. To state the obvious, one is ground-up peanuts; the other is cookies. They're both about 90 calories per tablespoon; but peanut butter is a source of protein with 4 grams per serving, while cookie butter has none.

Still, it's fun to try something new, and cookie butter would interest you if you like gingerbread flavored things. The burnt-sugar part of the flavor is unique; compared to peanut butter, it's very sweet, with 5 grams of sugar per tablespoon. The texture is creamier and dryer/less oily than peanut butter.

But it's hard to figure out exactly what to do with it, and raises the question, What makes you want to begin eating something that's 1. non-essential and that 2. you've never eaten before? Pinterest says you can dip pretzels or apple slices into it, spread it on pancakes and waffles, or use it in baking. More than one blog recommends eating it "straight from the jar." That doesn't seem like much of a "recipe." It also comes off as a tiny bit desperate.

If you're a fan of texture, then the crunchy is preferable. Little bits of cookie, still somewhat crisp, brought to mind crunchy peanut butter. It felt more substantial. The cookie bits made the flavor seem sharper.

It felt rich dabbed on apple slices, and it melted accommodatingly on a toaster waffle. The benefit there was that you could pick up the waffle and eat it with your hand, which you can't do with maple syrup. It accomplished some transformative magic on a box of Trader Joe's oatmeal cookies, perking up their bland flavor with some extra flavor and crunch. One presumes this would work on any cookie or cracker, were one to have such things in the house.