Unionizing or otherwise, it's time for NCAA athletes to have their say

Unionizing or otherwise, it's time for NCAA athletes to have their say 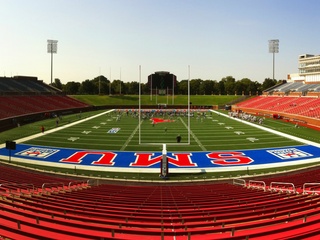 Private Texas universities such as SMU could follow Northwestern's lead in unionizing. Photo by Jmcstrav/Wikipedia
The Longhorns aren't likely to unionize anytime soon — if ever.

Baylor and other private universities are likely following the news out of Northwestern with heightened interest. Baylor Athletics/Facebook

The NCAA profited wildly off of Johnny Manziel's image and his No. 2 jersey. Photo courtesy of Texas A&M

When I was in college, I applied for many scholarships. They came with conditions. You know, things like maintaining a certain grade point average, remaining a full-time student and graduating by a certain time.

That rumble in the earth you felt March 26 wasn’t gas fracking. It was the college football world freaking out.

There are also highly regimented schedules during road games and bowl games; copies of leases for off-campus housing, detailed vehicle information and approval of outside employment; restrictions on posts to social media; and signing a waiver allowing Northwestern to use their name, likeness and image.

These details came to light during a suit brought by Northwestern players to the National Labor Relations Board for approval to form a players’ union.

On March 26, Peter Sung Ohr of the NLRB gave them the go-ahead to form a union. So that rumble in the earth you felt March 26 wasn’t gas fracking. It was the college football world freaking out.

Sure, this decision might eventually allow every college sport to form a union one day — and believe me we are a long way from that happening. Ohr’s ruling only applies to Northwestern because it’s a private institution, so there is some relevance for Baylor and SMU.

Texas is a right-to-work state, so don’t expect a University of Texas players’ union anytime soon. Northwestern is certain to appeal, and it will likely take years before Ohr’s ruling has a clearly defined path toward an impact on college sports.

Texas is a right-to-work state, so don’t expect a University of Texas players’ union anytime soon.

But it’s not symbolic, either. The players who brought this suit — led by former Wildcats quarterback Kain Colter — had to prove that they were employees of Northwestern. The NLRB defined employee as someone who is under contract of hire to perform services for another, subject to the employer’s control and received payment in return.

Ohr, much to most observers’ surprise, bought the argument. And when you look at the workload describe above, it’s a compelling case. I applied the logic above to my own job. Like a NU player, I have to work a certain number of hours each week. The services I perform are for the clients that contract with my company.

NU players serve the student body, the athletic department, alumni and fans by playing 12 games a year and, by their sheer presence on the field, sell tickets and merchandise. My employer controls my time by telling me when I need to be at work and when I can leave. NU players have a regimented daily schedule to adhere to. Finally, I draw a paycheck. NU players get a scholarship.

It’s that last part that is sure to create polarizing debate. Many people I know will say that a scholarship is enough for a college athlete. They should be grateful to get one, to have that free ride for their education. Lord knows I would have loved one back in the day. But I wasn’t nearly big enough, fast enough or strong enough to get one. And I’m here to tell you that the vast majority of college athletes in all sports pounce on that opportunity.

But for several years I’ve felt that college athletics should provide some sort of stipend system to athletes to handle ancillary expenses.

You may think that’s ridiculous, but consider this: The NCAA does allow athletes to work during the semester. They can make up to $2,000 in on- or off-campus work.

These players aren’t asking for money. They want colleges to be more proactive about things like improving player safety and raising scholarship values.

But when you consider that these athletes are devoting 40 to 50 hours per week to football, and then still have to study, well then when the heck are they going to work?

Since I left college in 1994 (and I’m dating myself, I realize), the paradigm of college athletics has changed dramatically, thanks to the money generated by the NCAA for college football and basketball.

The NCAA Men’s Basketball Tournament is worth $770 million per year in rights fees from CBS. The new College Football Playoff will generate $470 million annually to the 10 conferences and Notre Dame.

College athletic departments generate revenue on par with some pro sports teams, thanks to luxury suites, season tickets and merchandise like football jerseys. You know it’s a Johnny Manziel jersey if it has a No. 2 on the back. And he doesn’t get a dime.

In 2013, Business Insider’s Cork Gaines used the NFL’s collective bargaining agreement salary formula to determine the fair market value of a University of Texas player. Gaines’ figure came to $578,000 per player. A UT scholarship, according to Gaines, is worth about $37,600.

The funny thing is these players aren’t asking for money. They want colleges to be more proactive about things like minimizing brain trauma, improving player safety, raising scholarship values, enabling payment for post-college medical expenses related to football and raising graduation rates. Those are just some of the goals of the National College Players Association, the group that helped Northwestern players bring the suit.

The money college football generates had to be a component in their ultimate decision to bring this suit. But more important, these players want a seat at the table, one that will enable them to improve the game for the players that come after them. A union actually isn’t needed for that to happen, just someone in power in the NCAA to acknowledge it.

Private Texas universities such as SMU could follow Northwestern's lead in unionizing. Photo by Jmcstrav/Wikipedia
The Longhorns aren't likely to unionize anytime soon — if ever.

Baylor and other private universities are likely following the news out of Northwestern with heightened interest. Baylor Athletics/Facebook