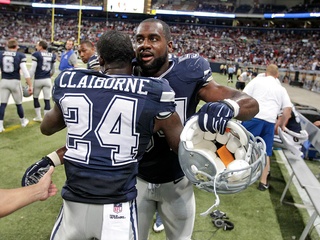 When former first-round draft pick Morris Claiborne left the Dallas Cowboys facility in the midst of a tantrum after being demoted due to poor play, it would be easy to blame the situation on yet another misjudgment of talent by Jerry Jones. Jones always wants to make a splash with a glitzy player and will forgo the boring, but necessary foundation of a team in order to grab new and shiny toys.

This time, however, Jones wasn’t alone in his glowing recommendation of Claiborne.

NFL “experts” had a rather high opinion of the corner out of LSU during the 2012 draft. Mel Kiper Jr. of ESPN fame tweeted that Claiborne was a top 10 pick on his board. Mike Mayock, the NFL Network’s draft guru, gushed that “Morris Claiborne is a special corner. He’s got the best ball skills of any corner coming out in the last several years. This is a rare athlete.”

In fact, the only red flag about Claiborne was a report that he had bombed the Wonderlic test, scoring a disturbing 4 out of 50 on the cognitive intelligence exam. No one thought that rumor was an issue in terms of Claiborne’s being able to succeed at the NFL level.

Today, it looks like everyone missed on the assessment of Claiborne. He routinely gets torched on coverage, he has trouble staying healthy, and he has rarely flashed the tremendous ball skills that had Jerry Jones comparing him to Hall of Famer Deion Sanders.

Claiborne is not an isolated case when it comes to the misjudging a prospect’s ability to play at the NFL level. In the 2012 draft alone, there were supposedly six “can’t miss” players who were destined to be stars in the NFL:

Out of those six, only Andrew Luck has panned out the way NFL insiders claimed he would. One player out of six. That’s only a slightly better score than Claiborne allegedly got on his Wonderlic test.

Robert Griffin III had a promising rookie season, but he has been sidetracked by injuries and now a quarterback controversy in Washington. Matt Kalil starts in Minnesota, but has been beaten routinely for sacks and is under fire.

Trent Richardson lasted one season in Cleveland, then was traded to Indianapolis, where he has looked pedestrian. That’s still more successful than Justin Blackmon, who isn’t even currently playing due to a drug suspension and multiple arrests.

The moral of this story is that there are far too many factors to consider when scouting NFL prospects to effectively — and consistently — judge their transition to the next level. For every hit (one scout had Luke Kuechly in his top six; Kuechly was the NFL defensive MVP last season), there is a miss (that same scout had Ryan Tannehill ranked in the top six, and now Tannehill could possibly be benched in Miami).

Considering the percentage of players actually turning out the way scouts thought they would, it’s probably best to take as many shots in the draft as possible. Maybe you’ll even hit on a star.