Trevone Boykin set a TCU record with seven touchdown passes to go with a career-high 433 yards passing and 461 in total offense in the Horned Frogs' 82-27 win over Texas Tech. Photo courtesy of TCU Horned Frogs 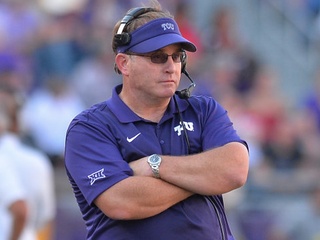 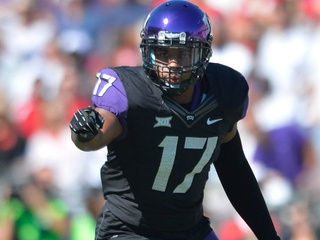 After nine weeks, the speculation ended. The College Football Playoff committee released its first top 25 of the 2014 season, and the speculation turned to analysis and whining, depending on where your team ended up.

It’s hard to imagine there was much whining in Fort Worth, as the CFP committee deemed the Horned Frogs No. 7 in their poll. The top four teams, as selected by the committee in early December, will compete in the first College Football Playoff in major college football.

The Horned Frogs were 4-8 last year. No one had a clue what to expect from them this season as they radically revamped their offense into something more resembling the spread formations that many college football teams run nowadays. Head coach Gary Patterson joked after TCU’s whopping 82-27 win over Texas Tech on Saturday that he needed defensive call sheets for four-and-a-half-hour games now.

If TCU wins its remaining five games, the team would finish 11-1 and have a resume that includes four wins over teams ranked in the AP top 25 when they played.

“This call sheet is one-sided,” he joked. “It’s going to need to be double-sided now.”

If no one had a clue what to expect from TCU this season, the College Football Playoff had that same flavor until Tuesday night’s release of the rankings. It isn’t so much what the committee would use as selection criteria. It’s what the committee would value as selection criteria. The CFP beta tested this process with the selection committee and members of the college football media. The results raised a few more questions — not that debate is a bad thing in college football.

One thing that CFP chairman Bill Hancock told reporters at Big 12 media days in July was that the committee’s members would have every tool at their disposal to determine the four playoff participants.

Those tools led to an unsurprising top four in the first poll. If the season ended today, the CFP semifinals would have an SEC flavor, as three teams — Mississippi State, Ole Miss and Auburn — ended up in the top four, with defending national champion Florida State. Oddly, it was the all-SEC BCS National Championship game between Alabama and LSU in 2012 that sparked the impetus toward this new playoff, which ends with the championship game January 12 at AT&T Stadium in Arlington.

But more than a month remains in this season, and TCU has a final stretch that could set it up to be a serious CFP contender, as long as the Horned Frogs keep winning.

TCU’s only loss is to Baylor, which was ranked No. 13 in the CFP poll. The Horned Frogs have already defeated Oklahoma and Oklahoma State. Losses to either probably would have derailed the Horned Frogs altogether.

Those wins, combined with a potential Big 12 title, would be a tough resume to beat come December. Not bad for a Horned Frogs team that would have been happy to return to bowl eligibility this season.

Trevone Boykin set a TCU record with seven touchdown passes to go with a career-high 433 yards passing and 461 in total offense in the Horned Frogs' 82-27 win over Texas Tech. Photo courtesy of TCU Horned Frogs