A Fake In Its Place?
A priceless theft at the Alamo? Mystery swirls around Texas Declaration of Independence 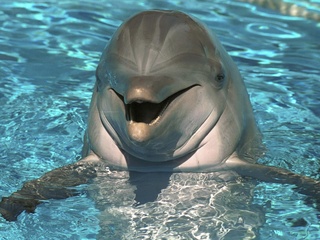 An uptick in violence against dolphins in the norther Gulf of Mexico has coastal authorities on high alert. AnimalWise.org

At least four targeted deaths have been reported this November in Louisiana, Alabama and Mississippi. Institute for Marine Mammal Studies/AP

Some sick jerks are terrorizing marine life this month along the Gulf Coast, where at least four dolphin murders have been reported in Alabama, Mississippi and Louisiana.

Animal lovers, be warned: This story is pretty unsettling.

November 16, researchers from Institute for Marine Mammal Studies (IMMS) in Gulfport, Mississippi discovered a dolphin carcass with its lower jaw removed. Less than a week earlier, the organization responded to a dolphin killed by a 9mm bullet wound — not unlike the one recently found in Alabama.

This November in Louisiana, a dolphin was recovered with its tail removed by what animal investigators believe was a straight-edge knife.

"Animals don't eat each other's tails off," IMMS executive director Moby Solangi told the Biloxi-Gulfport Sun-Herald. "We think there's someone or some group on a rampage. They not only kill them, but also mutilate them."

IMMS has investigated several other mysterious dolphin shootings since January. However, this recent spike in reported deaths — including a dolphin found killed by a screwdriver in June — now has marine researchers, fishing boat crews and coastal law enforcement on high alert.

Anyone found harassing, harming, killing or feeding wild dolphins can be fined up to $100,000 and sentenced to one year in jail for each violation under the Marine Mammal Protection Act of 1972.

“It’s repugnant. It’s cruel. It’s illegal. It’s senseless,” Solangi said. “These dolphins are already under stress from the oil spill, Hurricane Katrina and the dead zones. A number of dolphins have died in recent years. There’s no reason for this.”

How Texans can help
Thankfully, no deaths have been reported along the Texas coast, but officials with the National Ocean and Atmospheric Administration (NOAA) are discouraging all Gulf Coast residents from feeding, swimming with and petting wild dolphins. Anonymous tips can be reported to NOAA at 1-800-853-1964.

"People certainly can enjoy watching them, but we ask that they maintain a safe distance and never offer food," Jeff Radonski, a senior law enforcer with the agency, told CultureMap during a special NOAA conference call. "Dolphins simply get used to human interaction, and it's becoming a growing problem."

Allison Garrett with NOAA Fisheries explained that, since 2007, there have been at least 44 documented cases of dolphin-human interaction in the Gulf waters of Texas, with incidents ranging from entanglement to more targeted activity.

"Dolphins have a friendly reputation among people," she said, "but we have to remember that they're still wild animals."

"You don't go up to a grizzly bear and give it food," Radonski added. "Everyone should know that dolphins are strong animals and can hurt humans very easily.

"People can't imagine what it's like to have a 600-pound mammal in their boat, but it happens."

An uptick in violence against dolphins in the norther Gulf of Mexico has coastal authorities on high alert. AnimalWise.org