The House on Mango Street. Photo by Fabián Aguirre 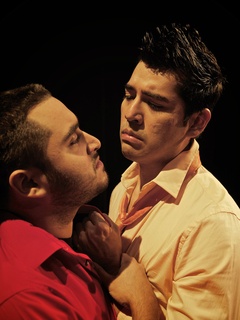 Dallas actor Ivan Jasso has a history of playing non-humans: a Chihuahua, a man-eating plant, an ancient Aztec god and, now, the moon.

But these are just a testament to his talent onstage, the ability to swing from animal to human, Shakespeare (in both Spanish and English) to Mel Brooks. Next up, the busy actor is playing two roles in José Rivera’s Obie-winning References to Salvador Dalí Make Me Hot at the Latino Cultural Center, presented by Cara Mía Theatre Co. from February 20 to March 8.

First he’s Benito, the war-scarred husband of the lonely housewife Gabriela. He’s also Gabriela's confidant the Moon, whom she turns to when Benito grows more and more distant. Cara Mía's production will use actors from its artistic ensemble as well as current SMU students, and place the audience onstage to foster an even more intimate experience.

In advance of Salvador Dalí, Jasso took the time to fill out our survey of serious, fun and sometimes ridiculous questions.

Role in References to Salvador Dalí Make Me Hot: Benito and The Moon

Where you currently reside: Mesquite

First theater role: A wolf and a prince in a middle school production called Magic To Do. It was written by the director with help from the students.

First stage show you ever saw: I don’t really remember what it was. The first clear memory I have is Comic Potential at Theatre Three.

Moment you decided to pursue a career in theater: I have a memory of making a quick change offstage during one performance of the previously mentioned middle school production, Magic To Do, where I realized “Hey, this is fun! I want to do this more!” I never did theater in high school. But the moment I made the decision was after a calculus class in college.

I was going to be an electronic engineer at first, but it just didn’t feel right. So that afternoon, I decided to change paths and continue finding that joy I had found years before. And it’s still fun.

Special skills: Patience, growing facial hair, creating a meal from whatever ingredients are left in the fridge and pantry.

Something you’re REALLY bad at: Leaving dirty socks on the floor.

Favorite movie(s): The Goonies, Scott Pilgrim vs. The World, The Shawshank Redemption, From Dusk Till Dawn, Pulp Fiction (or any Tarantino flick), Tombstone, Back to the Future trilogy, Who Framed Roger Rabbit, Star Wars (IV, V, VI), The Dark Knight, most of the Marvel Comics films, Goodfellas, The Fifth Element, Tropic Thunder, and many more.

Favorite song: Depends on the mood and the moment.

Dream role: Again, I don’t know if there is just one. I’ve always wanted to play Usnavi in In The Heights, or Iago in Othello, or Danny in Danny and the Deep Blue Sea.

Favorite musical(s): Little Shop of Horrors, In The Heights, The Book of Mormon, Dr. Horrible’s Sing Along Blog, Into The Woods, Urinetown, City of Angels

Favorite food: All of it!

Something most people don’t know about you: My first language was Spanish, so I had a bit of an accent when I spoke English. When I began studying theater and film, I had to practice vocal exercises to neutralize my English.

Place in the world you’d most like to visit: Australia

Pre-show warm-up: Depends on the show. Usually includes leg and back stretches. Some vocal articulation warm-ups. If I have to sing, I play vocal warm-up tracks in my car on the way.

Favorite part about your current role: I get to play opposite my wife (Stephanie Cleghorn Jasso).

Most challenging part about your current role: Working out to feel and look the part.

Most embarrassing onstage mishap: I was doing Guys and Dolls and the crotch of my pants split open during a stretch five seconds before the curtains went up for the big dance number. I don’t think any audience members noticed, but would they have mentioned it?

Career you’d have if you weren’t in theater: I’d like to think firefighter.

Favorite thing about Dallas-Forth Worth: It’s my home.

Most memorable theater moment: Opening night, during the curtain call of Crystal City 1969. Most of the theater was packed with folks from Crystal City, Texas. A lot of them had lived through the events portrayed in the play. Some were watching themselves portrayed on stage.

There was an incredible energy emitting from all the people. I had never felt that before! Tears formed as that energy surged through me and the rest of the cast.

The House on Mango Street. Photo by Fabián Aguirre