Candy's Dirt
The most expensive high-rise condos in Dallas 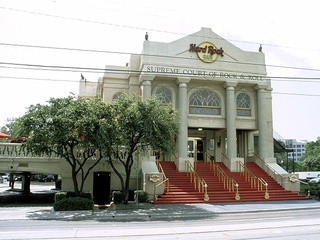 A mixed-use high-rise is going up where the old Hard Rock Cafe used to be.

Years after the old, much-revered Hard Rock Cafe on McKinney Avenue in Uptown Dallas was razed, plans are finally underway for a new high-rise to be built on that site.

Stoneleigh Companies has acquired the land for the development of One Dallas, a mixed-use, high-rise tower at the northeast corner of McKinney and Routh. One Dallas will include up to 30,000 square feet of premium restaurant and retail space and 200 apartment units in a 20-story tower.

"The former Hard Rock Cafe site has been sought after as the best development location in Texas," said Rick Cavenaugh, president of Stoneleigh Companies.

"The acquisition of the site for One Dallas is an opportunity to develop the premier multi-family property in the rapidly expanding Uptown market," said Rick Cavenaugh, president of Stoneleigh.

"The former Hard Rock Cafe site has been sought after as the best development location in Texas, and we are fortunate to ... work with architect Phil Shepherd to design an iconic tower that will include two or three world-class restaurants and 200 units of super luxury apartments. We expect to break ground on the tower in 1Q14."

No relation to the Stoneleigh Hotel in Dallas, Stoneleigh Companies is a private real estate investment and development company. It has acquired more than 3,600 units in the past three years and is building more than 1,000 units, including M2 Apartments in Denver, One Arlington in Chicago and Waterford Springs in Houston.

Stoneleigh's partner on the project is Dallas developer/investor Cheng Investments. The two have co-invested on two other projects in Texas in the past three years, including the 80-unit Silver Spring Senior Housing property in Forney and Waterford Springs, a 308-unit new construction project near the Woodlands.