Case against Candy Evans, Laura Wilson and WFAA gets nuttier thanks to power-hungry judge

Case against Candy Evans, Laura Wilson and WFAA gets nuttier thanks to power-hungry judge 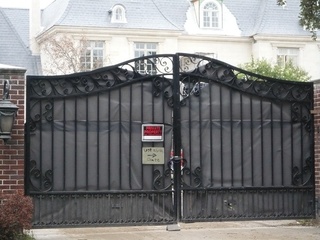 The lawsuit filed against real estate reporter and CultureMap contributor Candy Evans, Channel 8 WFAA and Laura Wilson by Strait Lane residents Richard and Leanne Malouf has moved into mediation, a process that begins on Friday.

Malouf, a dentist who's been accused of Medicare fraud, and his wife, Leanne, filed a lawsuit October 16 alleging that Evans et al trespassed on their property; invaded their privacy; and defamed, libeled and slandered them after publishing photos of the Maloufs' backyard with its ongoing construction of a massive waterpark.

"The parties have agreed to mediate the case, and we'll begin that process [Friday]," says Larry Friedman, who is representing Evans.

​ The Maloufs filed a lawsuit October 16 alleging that Evans, Laura Wilson and WFAA trespassed on their property; invaded their privacy; and defamed, libeled and slandered them.

On October 19, Judge Sally Montgomery of Dallas County Court at Law No. 3 issued a temporary restraining order for two weeks, forbidding anyone from stepping onto the Maloufs' property. That put the case on hold and gave the parties an opportunity to mediate a solution rather than going back to court.

It also let the Maloufs feel like they'd scored a victory, even if, as they claimed, neither Evans nor WFAA had trespassed in the first place. Evans maintains that she never trespassed in order to obtain the photos she took for her blog, Candy's Dirt.

"I don't care what the law is"
Mediation would be far preferable to returning to Montgomery's court. Her ruling may have been righteous, but getting it was a power-tripping beat down, with the judge rambling, lecturing, flipping coins and scolding Paul Watler, the lawyer representing Belo/WFAA, for not listening to her carefully enough.

"Lemme give you my first view of this, that Candace has gone on the property and peeked in without permission, per the affidavit, and she can't do that," Montgomery began, then asked idly if this was a house that burned down before veering off into a rumination about its proximity to the home of Dirk Nowitzki. "If the Maloufs don't want anybody on their property, I'm going to say that no one can be on that property."

Watler responded by saying that WFAA denied all allegations and that if the backyard were visible, then there would be no expectation of privacy.

​ Mediation would be far preferable to returning to Montgomery's court. Her ruling may have been righteous, but getting it was a power-tripping beat down.

"Well, it is important what the law is," Watler said.

Jason Friedman, Evans' lawyer, said that she also denied the allegations, but Montgomery cut him off too.

"If you look at the photos, you can tell," Watler said.

"No, I can't tell," she said. "I generally send things to mediation. In the meantime, we just don't need any press on this. This is not on the record, and it's not for public information.

"Lemme tell you what. This will not be discussed, except for any restraining order. If you choose to do that and if any of the allegations are true, then it can cause trouble for you. ... If you repeat this story again and any of it is accurate, then you're all compounding the problem for yourself."

Watler responded, "We don't agree that this court can restrict ..." before Montgomery cut him off again with the kind of lecturing tone you'd use on a 6-year-old if you were a bad parent.

"You didn't listen very carefully, because if you listened carefully, you'd be careful. That's all I said," she said.

Heads I win, tails you lose
They spent the next 15 minutes trying to schedule the follow-up hearing date. She wanted it to be November 1, but Watler had appointments in Austin, including a dinner, and asked for November 2.

"No, I can't," she said, before pointing out that he could get to Austin in time for dinner.

To decide who would present discovery first, the judge suggested flipping a coin. The guard handed her a quarter, which she flipped but dropped, then stepped on it.

"You can still catch a plane. Unless you want to drive it," she said.

The hearing was set for November 1. "Sorry about that," Montgomery said unapologetically.

From there she segued to her belief that this case "is like no big deal, this is like cookie-cutter," she said. "I've been around way longer than anyone else. You know how much longer I've been around? I've been here 16 years and I don't think anyone else has been here more than eight."

By now, she was standing in front of the bench, her robe removed to reveal an animal-print jacket. A guard brought her a can of A&W root beer, and she popped the top.

"Can we just agree to something?" she asked. "If there's nothing to this, let's just get the discovery out and get rid of it."

To decide who would present discovery first, she suggested flipping a coin. The guard handed her a quarter, which she flipped but dropped, then stepped on it.

"I just want to see you show a sense of humor," she said to him.