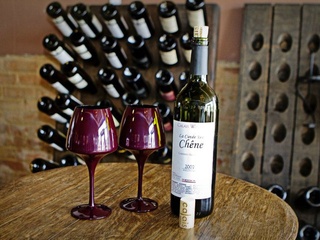 Unable to secure the kind of permit it needed to stay in business, Calais Winery will leave Deep Ellum and relocate to Hye, Texas, in the Hill Country. Benjamin Calais, who owns the winery with his wife, Melynn, confirmed that the winery would vacate its location on Commerce Street at the end of June.

The departure goes against a tide of places that have moved into Deep Ellum, most recently Pecan Lodge, which opened on Main Street on May 23. According to Calais, their exit resulted from the city's refusal to grant his business adequate zoning.

​"The rules for wineries have always been vague, and for some reason the City of Dallas makes it as difficult as possible," says Benjamin Calais.

"We worked on this for three months," he says. "If someone says no, then I'm not going to fight it. I'm going to find a place where we are wanted, and that's what we did."

Calais says that the problem lies with the fact that the city doesn't know how to classify wineries.

"The rules for wineries have always been vague, and for some reason the City of Dallas makes it as difficult as possible," he says. "We're a small winery. We're not going to have a big impact. We're not a brewery turning tanks over every two weeks. We only bottle 500 cases a year."

"We're not a wine bar, we're not a restaurant, we don't deal with any food," he says. "We manufacture wine and sell the wine we manufacture. We're a farming venture, we're the back end of a farming business. When you run out of produce, you don’t sell produce."

In order for their business to survive, they had to double their output, which meant upgrading to a larger facility. "That’s where the problems started," Calais says. "In order to produce that much wine, you need to have the right equipment and the right place that accommodates the combination."

They had their eye on a spot in Bishop Arts. "We had a deal done, but it was contingent on our getting our certificate of occupancy," he says. "There wasn't an explanation."

Calais could have obtained a permit if it had been willing to sell wine by the glass and identify itself as a bar. But that would have exposed it to a permit review every 12 months.

"If the city were to decide to kick me out after 12 months, there'd be no way for me to recoup the money," he says. "I have 100 percent of my money tied up in this project. It's just not smart business."

They've been working on their new location about four hours away, not far from Fredericksburg, since early spring, with a planned reopening in the fall. "We're expanding and will have a vineyard on site," he says. "In the end, it's working out for us."

Until then, he looks forward to running out of wine. "We have customers who want to come in as many times as possible," he says. "We're already selling out of port, Syrah and rose. It would be nice to run out of wine before we move."

Devonshire: A close-knit neighborhood that's only getting better
Frisco: The go-to place for families is a favorite for this pair of top agents
Northwest Dallas: A mix of home styles gives each community character